'A Hard Rain' review or 'Fuck the fuck away from me, I'm dancing here!'

'A Hard Rain', Jon Bradfield and Martin Hooper
Above the Stag, 4th March 2014
Written for Time Out 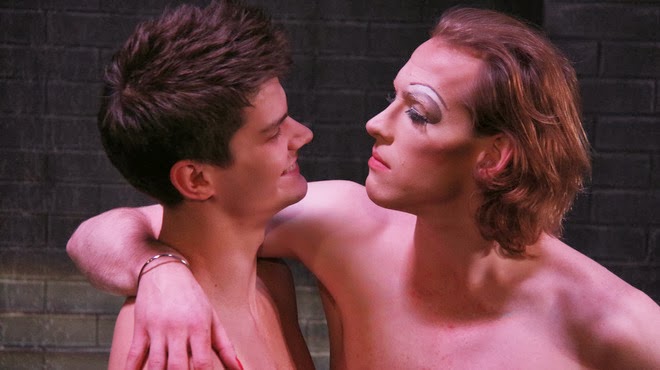 A revolution is coming. It’s New York, 1969, and pretty much every underground gay bar has been raided and shut down. The Stonewall riots are just around the corner. When they finally kick off, drag queen Ruby will be at the front, blazing in lipstick and with stilettos held high.

‘A Hard Rain’ is the first ‘straight’ play from panto experts Jon Bradfield and Martin Hooper. It unfolds in a mafia-run gay bar and is packed with sharp gags and vibrant characters. But the plot is wayward and Tricia Thorns’s laboured production feels a little slow. Far too much time is spent hanging out with the mafia or shifting the scenery, when we really just long to return to Ruby.

Michael Edwards plays the ex-soldier and drag queen with utter conviction, making the most of some cracking lines: ‘I guess your largesse is bigger than your large ass.’ It’s a huge role and, while the spectre of the panto dame lingers, the edges have been softened. James El-Sharawy impresses as swaggering street kid Jimmy – he’s got one hell of a dirty mouth but looks like a boy with an ice-cream when he smiles.

Despite the play’s juddering, there are some stellar moments. During a flashback to Vietnam, Ruby is stripped of his make-up and dressed in fatigues. Fascinatingly, it is in these moments that Ruby – a soldier at war, denied his drag queen warpaint – looks most vulnerable.