'King Lear' review or 'A brave but painful night at the theatre.' 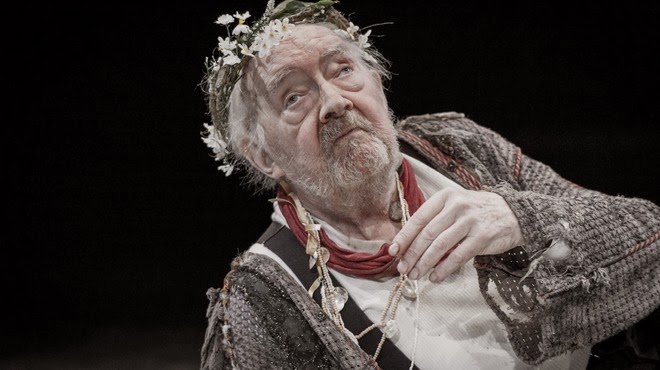 Life and art are performing a cruel little dance in this production of ‘King Lear’ from Darker Purpose Theatre. The show begins with an announcement from director Lewis Reynolds: David Ryall is not well and will perform with his play text. The cast rallies brilliantly but a ‘King Lear’ with a faltering Lear is always going to be very hard work.

Designer Alexander McPherson’s set has a faintly ritualistic air. Huge flags droop in a circle above the stage and the principal props are made of stone. The actors perform inside a chalked circle and the men wear military gear. It doesn’t add up to much and looks a bit like a bunch of soldiers have camped out in Stonehenge.

There’s little fluency to the scenes and many of the actors seriously overdo it. Michael Luke Walsh’s Edmund spends too much time imitating others’ voices and not enough getting to know his own. Ryan Wichert’s Fool is energetic but too brash and although Dominic Kelly throws himself into the role of Mad Tom, it’s often hard to make out what he’s saying.

Charlie Ryall (David Ryall’s daughter) is a bedrock of stern authority in this understandably shaky production. She performs with clarity and an almost noble earnestness. David Ryall’s Lear reminds one of an indulgent professor. He is quiet, subdued and reluctant to raise his voice. It’s not the performance we hoped for given Ryall worked at Olivier's National Theatre for over ten years, but there are still some arresting moments. The awful end scene is played out in a whisper and the final words – ‘Never, never, never’ – are quiet but deadly.