'Other Desert Cities' or 'I think we need a carpet.' 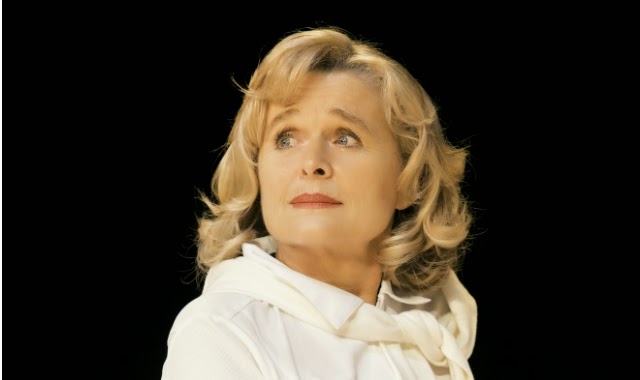 The West End is awash with TV and film celebrities but specialist theatre actresses are often woefully overlooked. This is a huge shame, since they can work the stage like no other. Sinéad Cusack and Clare Higgins are two of the best stage actresses we’ve got. They’re both on scintillating form in Jon Robin Baitz' family cum political drama Other Desert Cities.
The Old Vic stage has been transformed into the round for this season, which means the audience is seated right on top of the stage. It’s deliciously close and uncomfortable. Robert Innes Hopkins’ set is a swish and expansive living room in Palm Springs, California, complete with a fancy fire and well stocked bar. It looks more like a show house than the Wyeth’s family home.
This pristine living room is turned into a domestic war zone when black sheep of the family, Brooke (Martha Plimpton), announces she is to publish a tell-all family biography. Crucially, the book will explore the suicide of Martha’s brother Henry, who died in a politically motivated bombing when Martha was young. His pictures have now been removed from the home and all trace of Henry has, until now, been shoved beneath the Wyeth’s shiny floorboards.
Baitz cut his teeth writing for TV and there is a zippy confidence about this play that reminds one of the best American TV dramas. The pace rarely drops, the one-liners sparkle and the characters are carved out with deft, sharp lines. As the family clash about Martha’s book, our sympathies are skillfully marshaled in conflicting directions.
Cusack is captivating as the country club loving, ‘waspified Republican’ Polly Wyeth. An ex movie-script writer, Polly now saves her most withering put downs for her ‘whining leftie children’. Cusack is a study in acidic energy and leisurely disgust but her eyes, deadened and darting, suggest a history of hidden pain. When her daughter spits out her hatred for her, Cusack stays silent but her hands and mask slip for just a moment.
Higgins is extraordinarily watchable as Cusack's sister, recovering alcoholic Silda. She swears with relish, smokes with abandon and peppers her speech with a life-loving, guttural laugh. She is the rough wind to Cusack's icy breeze. When the two square up to each other, it's like witnessing a bull fight in human form.
Peter Egan compels as closed book father, Lyman, whose first response has always been ‘No comment.’ Egan roams about like a wounded bear; when he lashes out, it's frightening and sad. All the characters could be clichés (the remorseless Republicans, the righteous lefties and the whacky hippy) but the acting is so strong and Lindsay Posner's direction so rigorous, that the characters feel lively and true.
The balance shifts slightly in the second half, which becomes overtly political and a tad plot-driven. The neatly observed characters risk turning into political mouth pieces. But despite a tendency towards overstatement in the closing scenes, this remains an involving drama, which examines how politics can break a family and a country in two.