'A Study in Scarlet' or 'Mormons, mystery, murder and a harpsichord.' 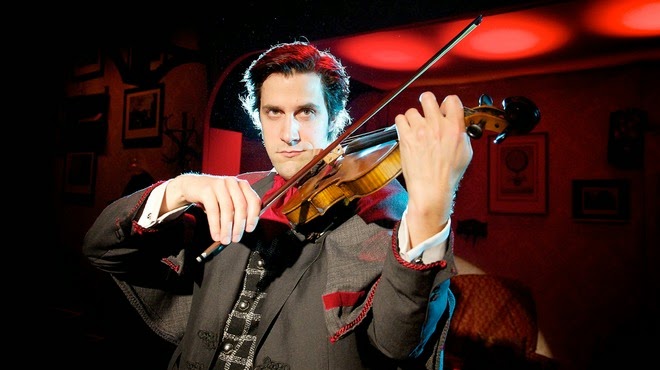 This adaptation of the Sherlock Holmes story is almost as whip-smart as the great detective himself. There’s live music, blood soaked walls, creepy baddies and a brilliantly smug Holmes. There aren’t nearly enough juicy murder mysteries on the stage and this is a welcome surprise from Tacit Theatre, who have created an entertaining and eerie show.

The play covers Holmes’s first adventure which, in typical Conan Doyle form, is fiendishly complicated. The plot jumps between an extreme religious sect based in Utah and a mysterious corpse in Camberwell. It is up to Holmes, along with Watson, to tie the ‘scarlet threads’ together and close the case.

This is a dynamic and involving script from Lila Wheelan and Greg Freeman. Regular asides from Watson keep the audience informed, amused and on-side. Katharine Heath’s set with its Victorian decor (fussy picture frames, ornate clocks and endless books) spills into the audience and pulls us into the action.

Live music adds extra pep to Nicholas Thompson’s sparky production. Philip Benjamin’s Sherlock Holmes plays wistfully on the violin and reminds one of a supremely self-involved Oxbridge student. Edward Cartright is a tall, pale and flustered Watson, who bleats out his bafflement to the audience: ‘Now I’m the bait!’

Rhys King and Paul Lincoln play the dim London coppers, as well as sinister religious followers. They are silly when they need to be but also cruel and unhinged. The audience is ensnared and on-edge, perched on our seats and excitedly straining for clues.