'Blithe Spirit' review or 'Jessica Fletcher is Back!' 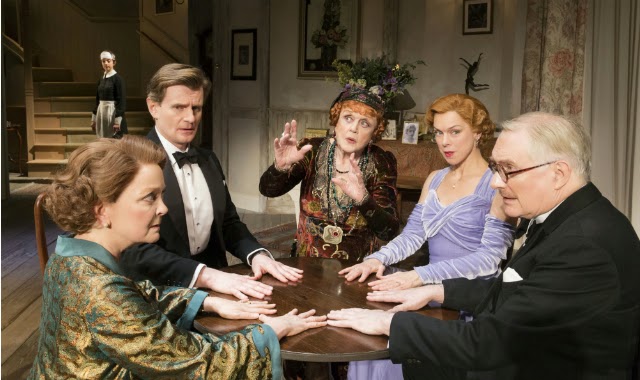 Angela Lansbury hasn’t performed in London in nearly forty years and, boy, have we missed her. Her entrance alone is met with grateful applause. But this isn’t just nostalgia at work. Lansbury might be 88 years old but she is a force of nature on stage. In fact, she’s the most spirited performer of the night in Coward’s ghostly comedy, Blithe Spirit.
Lansbury plays spirit medium Madame Arcati who is called in by preening writer Charles (Charles Edwards) to help research his next book. The costumes (designed by Simon Higlett and Martin Pakledinaz) are superb and Lansbury looks like an exquisite magic carpet with her patterned velvet dress and glittering accessories. She is a blast of colour against an otherwise pristine and predictable backdrop.
Lansbury is miked up, which takes a little getting used to – but ultimately adds a fittingly spooky tone to her delivery. Microphone aside, this is a performance of great verve and detail. Madame Arcati’s spiritual trances, as she attempts to connect with the 'other side', are a sight to behold. Lansbury juts and jolts about the stage, her legs flicking about and her arms waving jauntily above her head. She looks like a batty teenager at a rave, where the music is being repeatedly switched on and off.
We’re treated to bursts of song, as Madame Arcati absentmindedly warbles some of her speech. But there is also dignity and resolve nestling beneath all of this comic bustle. Lansbury has a deadly cold stare, which she uses to brilliant effect. When one of Charles’ guests bleats out, ‘I’m terribly excited!’, Lansbury fixes her with a fierce look and dead pans: ‘Please don’t be.’
The trouble with having Lansbury on stage is that everyone else seems rather boring in comparison. Edwards is perfectly convincing as ‘wounded spaniel’ Charles but he’s one note compared to the trilling Lansbury. Janie Dee is excellent as Charles’ no nonsense wife Ruth and Jemima Rooper, tasked with playing a ghost, still manages to perform with zest and passion. But they’re all a little colourless (especially when decked in their spooky white gowns) next to the rainbow coloured Lansbury.
Michael Blakemore’s production feels a little slow and the pace drops significantly in the second half. Blithe Spirit might’ve packed more of a punch during its 1941 debut – a time when the audience was dying to laugh at death – but today it comes across as a comic exercise and the joke begins to wear thin. Even the denouement, which involves a lot of crashes and flashes, feels tentative.
The whole production could do with a little more zip and zing. But this is really the Angela Lansbury Show and I will never forget her sandwich loving, finger clicking, leg jolting performance. En-trance-ing!