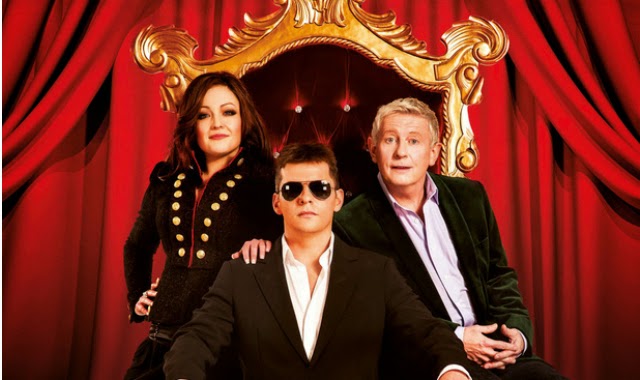 I Can’t Sing! is an eccentric and entertaining homage to the X-Factor. This was never going to be a lacerating satire; after all, Simon Cowell himself is listed as a producer. Instead, this is an affectionate pastiche of the global pop-singing talent show. It is written by Harry Hill (comedian and creator of TV Burp) and has his trademark nuttiness stamped all over it.
The core story is really quite simple. Orphan Chenice (Cynthia Erivo, a real pro) and Max (Alan Morrissey) are two young singers, down on their luck and looking for love. The first half sees our plucky duo battling through the auditions and the second half focuses on the live TV shows.  Oh – and there is also a talking dog, a grandpa with an iron lung, an angry hunchback and a man dressed in blue streamers, who runs about pretending that he is the wind.
This is a bit like reading a massive Heat magazine special on the X-Factor, guest-edited by Harry Hill. The show is packed with celebrity ‘gossip’ and is bang up to date. There are cheeky references to Simon Cowell’s baby, Cheryl Cole’s love life and the country’s obsession with ‘selfies’. It’s all one big popular culture in-joke and, as long as you’re in on the joke, it’s damn good fun.
Steve Brown’s songs are cheeky takes on contemporary classics. A hunchback raps an Eminem style number - only his backing singers are break-dancing monks. Susan Boyle lookalike Brenda (Katy Secombe) sings a Chaka Khan-esque anthem, surrounded by supermarket workers jogging on their tills. Chenice’s final big number is a booty wiggling, Beyoncé booming ballad.
Simon Cowell (Nigel Harman) is bigger than god himself and makes his entrance sitting atop a cloud. There’s a barmy show-girl song, in which Harman smoothly tap dances amid a sea of pink feathers. Cheryl Cole, cheekily named ‘Jordy’ (Victoria Elliott) preaches about self-love, whilst surrounded by mirrors and identi-Cheryls. Louis (Ashley Knight) spends the live shows in a hospital bed and Simon Bailey nails all the faux-quirky traits that make up Dermot O’Leary.
It’s a hectic show and could’ve descended into total chaos, were it not for Sean Foley's militantly precise direction. Es Devlin’s set is an inventive combination of projections and rotating stage sections, which lends the show fluidity and flair. It’s a necessary innovation, since Hill’s book leaps about to the strangest of places, including outer space. It’s a mightily strange journey but, as the batty closing song reminds us, ‘It’s a journey to a dream!’