'I Wish I Was Lonely' review or 'Did you get my message?' 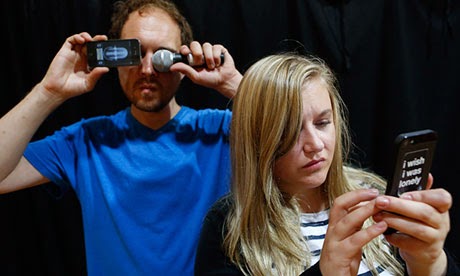 Chris Thorpe explored fate and coincidence in ‘There Has Possibly Been an Incident’. Using an immaculately crafted monologue, Thorpe pulled together all the tiny threads and arbitrary decisions that lead up to one extraordinary accident. In ‘The Oh Fuck Moment’, Thorpe and Hannah Jane Walker unpicked those cold-sweat moments, when we realise we have royally fucked up and our carefully laid plans have come to naught.

Both shows examined what happens when the autonomous life we imagine we’re leading is suddenly upended by forces beyond our control. ‘I Wish I was Lonely’, the latest devised show from Walker and Thorpe, playfully circles around a similar theme from a different angle. This piece is about mobile phones, the internet and constant connectivity, which put us in complete control of our everyday lives whilst also grabbing at our autonomy, identity and personal freedom.

The audience is seated on tightly packed chairs, all positioned at a slight angle. We are close to each other but never in direct contact. Everyone is asked to leave their mobile phones switched on throughout the show. As Thorpe and Walker consider the spawning impact of our phone-led lives, their subtle speeches are interrupted by rings and bleeps. Just as we do in our own everyday lives, Thorpe and Walker have chosen to interrupt an event, a moment, that should really be under their control.

By translating our own technological choices into the show, Thorpe and Walker tap into some barmy ideas that now become commonplace. Occasionally, Thorpe picks up a phone and reads a text. They invariably sound like an utter waste of time. All of our mobile phones are placed in a circle in the centre of the room and they look so small and silly, clustered together in an anonymous mass. Take the phone away from the person and it suddenly just looks like a phone. Put in a person’s hand and it somehow seems more important, so much bigger than the sum of its parts.

Thorpe lies in the centre of this circle of phones and fans out his arms, in the manner of DaVinci’s Vitruvian Man. For some time he just lies there, one phone placed on his chest as the other phones ring and beep around him. This image alone would have been enough to prick the audience’s glazed assumptions. How far are technological advances developing us or has all that progression leapfrogged mankind? Technology is galloping ahead as we - attached to but no longer physically integral to this progress - are left behind, stagnant and unchanged.

We glibly assume that advances engineered by man are advances for man but this show subtly interrogates the fallacy of that assumption. In one painful and raw moment, Walker recalls when she suffered a miscarriage. As always with these two performers, it’s hard to assess whether this reflection is true – but I think it is. It certainly felt true. So, Walker remembers her miscarriage and the way in which her deep discomfort with mobile phones caused her to text the news to her boyfriend. It’s in this moment that the invasion of the phone starts to feel sinister. Phones are digging into our most private moments and stamping all over them. They are changing the way we think and feel.

There’s a super smart and deceptively pared back interchange, when Thorpe and Walker mimic the break-down of a relationship. Standing at opposite ends of the room, the two robotically read texts into a microphone. ‘I miss you, I miss you, I really miss you.’ Finally, as Thorpe monotonously hammers away, the girl breaks down, ‘We need to talk’. And then – silence. It is so odd that we have reached a point where a lack of communication is the most powerful and truthful mode of expression left to us.

This show does get a tad sentimental in places. The connection that Thorpe and Walker forge between a lack of genuine loneliness and the absence of love feels a little loose. This connection strikes me as a short-cut to a much trickier and more oblique dilemma. But Thorpe and Walker have certainly tapped into some crucial ideas with this engaging and probing show. In a memorable call to arms, Thorpe urges as to sit on the bus, put our phone away and look out the window. The internet has helped us to absorb so much – but it has also stopped us seeing what’s right in front of us.