Theatre, Anger and How to Harness the Rage 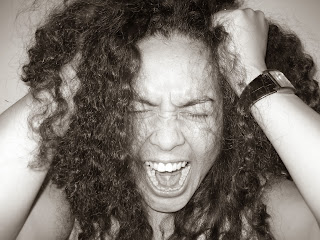 Sometimes I hate the theatre. Shows have made me so angry that I’ve spent the whole night in a simmering frenzy. I’ve left the theatre with nail marks in my hands and chomp marks in my cheeks. On the most extreme occasions, I’ve stormed out the theatre with angry tears stinging my eyes.
I used to think this rage was a bad thing. But after a number of years in theatre criticism I’ve started to realize that anger provoked in the theatre be useful and illuminating. Sometimes it’s the clearest sign that a show is actually working.
The first production to make me really angry was Katie Mitchell’s version of Virginia Woolf’s The Waves in 2006. I was angry for two reasons. Firstly, this was not my idea of theatre. The show involved a lot of abstract video projections, elusive snippets of text and an on-stage foley artist amping up little sounds, such as rustling paper or crackling fire. I just couldn’t understand how these weird little touches were meant to be dramatic, involving or relevant and I felt left out and confused.
Secondly, Mitchell’s version of The Waves did not resonate with my original reading of Woolf’s mesmerising novel. Mitchell was wrestling The Waves away from me and turning it into something different and distant. Waves made me realise I was much more conservative than I thought; that I had set ideas about literature and theatre and narrative, which had not yet been properly interrogated. Anger, in this case, signified my fear of being left behind – and prompted me to challenge and question my engrained preferences much more rigorously.
The next show to upset me was created by another practitioner who, like Mitchell, I have since come to admire greatly.  I am almost always angered by the theatre-makers I respect the most. I find that idea very useful to bear in mind, both in the case of theatre and ‘real life’. Lots of the time anger equals respect, only a little twisted out of shape.
But – damn – was it hard to think clearly after leaving Tim Crouch’s devised show The Author!This provocative piece played in The Royal Court in 2009 but is still smouldering somewhere in my body.  An audience is led into a studio space, which contains two opposing tiers of seating and no discernible stage. Actors within the audience begin to reflect on a recent, shocking play they have staged in this very theatre. The audience is forced to remember and imagine along with the actors.
Never have I wanted to leave the theatre so badly! What has been so fascinating, over the years, is to think about why I wanted to leave and whether this violent reaction meant the show was a success or failure. I wanted to leave because I felt manipulated; because I was forced to see or imagine things I did not want to see; because I felt upset and powerless. I also wanted to leave because I felt short-changed. I go to theatre to see and Crouch’s show was messing with that expectation in the most confusing and challenging ways imaginable.
These ‘angry’ experiences have forced me to analyze myself and theatre much more closely. Anger, it seems, is a gnarled up indicator that I want to learn more; that I don’t want to be angry next time.
It has taken me a long time to realise that anger can be a positive thing. I used to feel white rage every time I walked around the Tate Modern. I’d storm around the gallery, my head bursting with indignant ripostes; ‘That’s just a collection of dots! Why in god’s name do people call this ART?!’
My anger and bewilderment became so strong that I eventually refused to set foot inside a modern art exhibition. It wasn’t until a thoughtful friend walked me around an exhibition that this anger subsided. We talked as we watched. I told me friend why I didn’t like a piece; he listened and we moved on together. I learned it was OK to stop and look only when something interested me. I became comfortable with the idea that not liking a piece did not mean I didn’t understand it – only that I didn’t connect with it.
I will never forget that gallery trip and what it taught me about anger and art. Anger is one of the most useful tools we’ve got in the arts; it shows us that we care, that we want to understand and, above all, that we should respect ourselves enough to not be frightened of anger and what it might teach us.