'The Disappearance of Sadie Jones' or 'Dreams, skeletons and dead people dancing.' 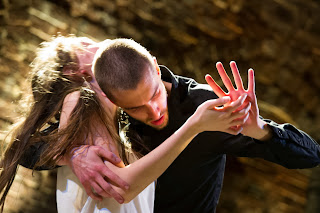 Sadie Jones is dead. Sadie Jones is mad. Sadie Jones is missing. What on earth is going on with Sadie Jones? ‘The Disappearance of Sadie Jones’ unfolds in a Stindberg-inspired hinterland, a dreamscape flecked with nightmarish visions. With just a few flicks of her writing wrist – words games, haunting repetitions and imploding sentences - Hannah Silva deftly explores the fine line between sanity and madness, joy and depression, the here and beyond.

There’s a mesmerizing and hazy quality to this production, which is as soothing as it is unsettling. Sadie Jones (a translucent Stephanie Greer) describes her situation with a childlike simplicity: ‘The tall thin people surround Sadie Jones’. It sounds a little bit like a bed-time story. But just as we’re about to relax, Hannah Silva – who writes and directs – roughly shakes the script and jolts us out of our revelry.

These jolts are verbal and physical and, despite their recurrence, almost always a surprise. That is because Silva is a master of rhythm, both with her writing and directing. As Sadie’s sister (Elizabeth Crarer) and lover (Alan Humphreys) reflect about Sadie, violent physical tics invade their speech. The lover retches repeatedly, lurching forward over and over again. Sadie’s sister talks in halting tones, as Sadie falls into her arms. A strangled scream escapes from the sister’s lips. Crarer and Humphreys handle these intrusions brilliantly, always holding onto something human in their performance despite the show’s precarious grip on reality.

For all the sister’s and lover’s efforts to keep talking and keep things normal, the darkness and weirdness that envelops Sadie’s life begins to take over. A harsh soundscape adds another level of fear and confusion. As Sadie talks about her skeleton, which has been etched with the words ‘a great massacre has occurred’, slashing sounds whirl about her. At other times a blank swirling sound fills the space, as if Sadie and everyone around her have been locked inside a vacuum.

Sadie’s journey is the most entrancing of all the strange avenues that criss-cross through this superbly constructed play. At one point, Sadie directs dead people to dance. It is a brilliant image; beautiful and sad and, despite its surreal nature, somehow honest. What a unique and sensitive imagination Silva possesses – and what a fine understanding of the tiny details that distinguish between the great gulfs in our lives.

Silva tweaks her script with pinpoint accuracy, transforming hope into fear, love into loss (‘I will love you forever/I don’t love you anymore) and life into emptiness, with just a few twisted sentences, warped repetitions or delicate shifts in tones. It is hard to say, by the end, if Sadie is dead or simply lost in her own private world of depression and paranoia. Is there really that much difference between the two?