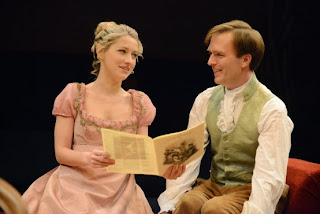 Well, you can count me out of wedlock. George Eliot’s ‘Middlemarch’ (1869) revolves around three marriages and fizzes with the ‘hideous fettering of domestic hate’. Geoffrey Beevers has, sensibly, lopped this novel into three separate shows. ‘The Doctor’s Story’ is the second in his ambitious ‘Middlemarch Trilogy’ and focuses on the o’er hasty marriage between Lydgate and Rosamund.


This is such a classy adaption. It isn’t the most dynamic production (I did spot a few glazed eyes) and, with the endless narration, there’s a whiff of radio show about it. But what this piece does brilliantly is to nail the awesome complexities of Eliot’s characters.

Whilst the narrator stands in the centre of Sam Downson’s prettily dressed stage, the other actors offer interjections and asides. When flighty Rosamund (Niamh) dreams of her moneyed future, her father objects, ‘That would be going too far.’ As Lydgate (David Ricardo-Pearce) struggles with the provincial way of life, the Middlemarchers gossip around him. Poe-faced banker Bulstrode (Christopher Ettridge), bleats virtuously but is undercut by dry comments from every corner.

Beever’s use of doubling (or tripling) adds extra layers to these rich characters. Michael Lumsden plays blustering father Vincy, all-round rogue Raffles and upstanding agent Caleb Garth. All the characters begin to bleed into each other and confirm one of Eliot’s finest observations: ‘Character is not cut in marble – it is not something solid and unalterable. It is something living and changing, and may become diseased as our bodies do.’