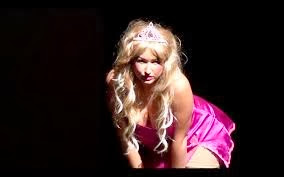 ‘Pretty Ugly’ has hit the headlines because it examines a horrifying recent internet trend: young girls (between 8 – 16 years old) are posting videos of themselves online and asking the question, ‘Am I Pretty or Am I Ugly?’ Unsurprisingly, these posts have received few positive responses and many cruel or salacious replies. The internet is a risky place to expose yourself, physically or otherwise.

After stumbling upon this trend, Louise Orwin – herself 26 years old – decided to pose online as a teenager and post her own Pretty or Ugly videos. This show examines the responses to these videos and picks out a few particularly disturbing interactions. We are shown a number of Pretty or Ugly videos from YouTube, as well as recordings of countless guys caught in Orwin’s (internet) web.

‘Pretty Ugly’ also includes a lot of audience interaction, some role play with a variety of dolls and trolls, a karaoke skit and a great deal of sliding about the stage on roller-skates. Some of these scenes hit a chord but there’s a ‘smash and grab’ feel to this show and it’s hard to sense a strong structure or tension behind it.

Orwin describes one of her darkest internet encounters using role play and a number of toys. The toys are meant to reflect the naiveté of these young girls posing online but they actually make the show feel a bit immature. The contrast between the innocent girls and threat online isn’t drawn out strongly enough and the role plays feel safe and cute rather than disturbing.

The show could be a lot fiercer and more focused. I get the feeling Orwin has slightly shied away from her shocking subject matter. There is a Britney Spears’ skit that might’ve really hit home, as Orwin writhes around the floor in a bright pink dress, half girl and half sex-object. But Orwin doesn’t go for it enough and the song comes as across as quirky, fun and strangely innocuous.

The best moments are when the toys and props are abandoned and Orwin simply speaks. The transcript of a free flowing monologue is projected on screen, rolling so quickly that Orwin struggles to keep up. These flowing speeches are excellently written and packed with text lingo, pop references and weird mismashed words (totes, fabulicious...). These teenagers are speaking another language; forceful and foreign and trembling with anxiety and excitement. The words scroll down the screen, gleaming out of a dark stage, exposed, isolated and unreachable.