'The Island' review or 'Keep your eyes on the horizon.' 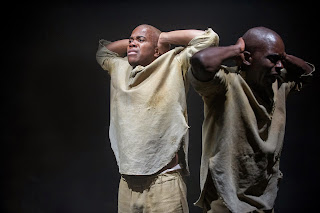 Two black prisoners stand opposite each other and shovel sand into their wheelbarrows. They work in near silence, except for the faint crashing of the ocean, the buzzing of flies and an occasional pained grunt. The prisoners circle a raised platform, dump their sand on top of each other’s pile and return to their original positions. They continue for what feels like an eternity.

The Island, devised by Athol Fugard, John Kani and Winston Ntshona, was first performed in Cape Town during the apartheid era and went by an altered title, Die Hodoshe Span. It is set in a ‘nameless’ prison which is really Robben Island, where Nelson Mandela was held for 27 years. This isn’t Mandela’s story but it is based on true accounts from equally brave political prisoners.

Director Alex Brown (winner of the director’s JMK award) keeps things necessarily and persuasively simple. Apart from the piles of sand and raised platform, Holly Piggott’s set is almost bare. We do not see the chains which bind these men together, the cell doors that close them in or the prison officers who command them. We are forced to imagine the restrictive elements, which makes them all the more oppressive and - disturbingly – partly of our own creation.

The cell walls are also reflected in the words, movements and eyes of the two prisoners, Winston (Jimmy Akingbola) and John (Daniel Poyser). Their stark phrasing is thick with the weight of their 10 year prison sentences. They talk of ‘eternal loads’ and Sisyphean tasks; ‘It’s my turn to empty the sea into the hole.’ Akingbola’s eyes are fixed always on the horizon, as if his soul has removed itself entirely from the present.

The dynamic between the two bubbles and blisters. When John discovers he is soon to be freed,  Akingbola’s Winston boils with resentment: ‘Your freedom stinks and it’s turning me mad.’ But the two also share moments of humour and tenderness.  Together, they bring the outside world to life in their cell. They act out phone calls with their friends and family back home, using a water cup as a mouth piece and playfully tussling with each other for the ‘phone’.

The two also rehearse Antigone, which they are to perform to their fellow prisoners. It is the ideal centre piece for this play; a Greek tragedy, which examines ideas of individual freedom, the control of the State and the word of God. Initially, their rehearsals are funny as Winston dons fake boobs and a ropey wig, as the wronged Antigone. He worries about how the prisoners will react and John replies: ‘First they will laugh. Then they will see – underneath all this bullshit – it is you.’

Underneath a harsh shared light, Wintston’s Antigone pleads with John’s Creon, a cruel and prejudiced leader. When Winston enters with his fake boobs, there’s not a squeak of a giggle from the audience. We see only him. Arguing for his rights, Winston – as Antigone - blasts Creon off the stage with a piercing and poised performance. That distant look in his eyes disappears as he fixes his gaze on Creon – and on us.