A Critic's Night Off at The Theatre 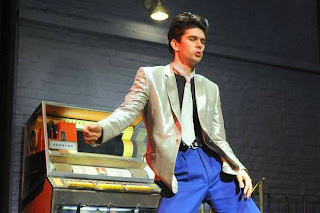 On Wednesday evening, I had a night off from theatre criticism. In a spectacular leap of imagination, I went to see a revival of Jez Butterworth’s vicious comedy Mojo at the Harold Pinter Theatre. It might not sound like much of a break but, for me, any night without my notepad is an unusual and exciting thing. Oh yes, this critic knows how to live a little.
Despite resolving to switch off completely and drink the night away in a gloriously glazed stupor, I learned a lot from my trip to Mojo. I started to think about what happens to the theatrical experience when you stop taking notes. I’ll tell you this: it’s a lot more social, much more silly and, in some ways, more insightful.
For one thing, I got dressed up. This might sound flippant but there is an important point here: my night at the theatre became an event rather than a job; a social rather than an introspective experience. The evening became about sharing pre-show expectations and interval reactions; a night of discussion rather than decision. It felt like a dynamic collective experience.
I also laughed far more than usual. When I’m working as a critic, there’s a barrier that goes up that makes it physically harder to laugh. Something – perhaps the constant whirring and analyzing – stops the body from letting go. I normally let out a few surprised squawks at the theatre but that’s it. On Wednesday evening, I was laughing like a kid on the sugar high of a lifetime. It helps that Butterworth’s play is packed with bruising punch-in-the-face lines like this: ‘You wake up. Eat breakfast. They cut you in half.’
I also found myself laughing at different types of things. Funny lines are funny lines, critic or not. But when I’m ‘on duty’, I find it harder to enjoy physical comedy. It’s curious, since in ‘real life’ there’s nothing I love more than someone falling flat on their face. Watching Mojo, I reconnected with my love of physical comedy. There’s a bit when Rupert Grint and Daniel Mays (who play Mojo’s club-staff and comedy henchmen, Sweets and Potts), spend a lot of time trying to throw up. As a critic, I’m not sure I would have been impressed. As a punter, I was a chuckle away from full-on snorting.
I also learned a lot about what makes a brilliant actor. One can get a little too theoretical about acting when writing a review. Watching Mojo, I was reminded that a great actor is simply the one who connects most strongly with the audience. As a critic, one doesn’t feel quite so involved with the audience, so that instinctive connection doesn’t always feel so immediate.
Every time Ben Whishaw walked on stage, he seemed to grab the audience by its collective throat. When he spoke, it felt like he was parting the sea – or at least the stalls. The best actors have a connection with the audience that is bigger than the text, the play or even their performance. It is something natural, physical and deeply personal and Whishaw has it in abundance. I was so immersed in the audience’s reaction on Wednesday eve that I could practically reach out and touch the thread that linked Whishaw’s eyes and our own.
On a minor final point, I also had a drink at the interval. This made the second half of Mojo – which is all glinting laughter and tiny shards of sadness (‘I lie there – and my mind spins on nothing’) – even more overwhelming. There’s nothing like a drink to help you lose yourself in the moment.
Ideas I will take with me from Wednesday night: don’t be afraid to connect a little more with the audience, allow yourself to enjoy the comedy and surrender to the silliest of gags. And, in the name of good criticism, have a swift drink at the interval.