'nut' review or 'Will somebody let me in?' 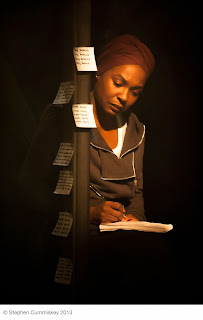 Debbie Tucker Green’s latest play is a tough ‘nut’ to crack. It is an enigma, wrapped in a mystery and shrouded in some brilliant verse. There’s only one certainty in this captivating but frustrating production: Elayne is burning cigarette holes in her arms and is very lonely and very sad. The rest is up for grabs.
Green also directs and her production simmers with a sense of loss. Nut is packed with absences; the absence of people, love, security, sanity and hope. The production is even missing a sense of place. Lisa Marie Hall’s bizarre set looks like something a mad scientist might have constructed. Twisted poles and scraps of metal hang suspended from the ceiling. It looks like a scrap yard sculpture and has a faint whiff of decay about it.
Initially, this strange space is filled with easy banter. Elayne (Nadine Marshall – as complex and subtle an actor as we have) shares a coffee with social worker Aimee (Sophie Stanton) and the two discuss their own funerals. The tone is light-hearted but a sense of unease gradually builds. A young boy (Tobi Adetunji) enters the space and sings. It is hard to tell whether he is dead or alive. When he brushes past a table, which hangs from the ceiling, the whole thing swings – spookily - in mid-air.

Green teases the audience, tempting us to make solid conclusions about these mysterious characters and their lives. The tense of the verse jumps about oddly and threateningly. Green hints at horrific events that might have already happened – or could soon take place. At one point, Aimee imagines Elayne committing suicide: ‘I couldn’t do what you would, wouldn’t, will do.’

Tiny actions take on a huge and teasing significance. A vaguely threatening man called Devon (Anthony Welsh) taunts Elayne with a cigarette. He drops ash on her hand and she does not flinch. Funerals and death and fear flood the stage.
It is tantalising stuff – but it is also hard work hunting for the truth in this production. The relentless uncertainty risks undermining the script. Green’s great strength is in her unflinching honesty. She is brilliant at highlighting the essence of a character with finely honed, sharp verse – but it is hard to do this in a play that constantly questions whether or not the characters are real.
Some of the best scenes are when the mystery lifts, just for a moment. A wife (Sharlene Whyte) and her ‘one day a weeker’ ex-husband (Gershwyn Eustache Jr) come to blows over the custody of their daughter in a central, dazzling scene. The scene pulses with a lifetime of love and hate and slides, painfully and believably, between tender honesty and icy cruelty (‘Now you showin your colours as a shit mother’). One senses how powerful this play might’ve been, had Green relinquished just a little ambiguity and really let her characters live.