'Terms and Conditions' review or 'This small print is SCREWED.' 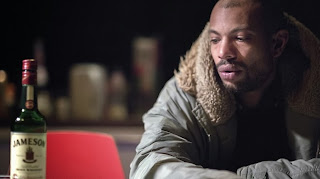 ‘Terms and Conditions’, written by journalist Patrick Marmion, depicts a Daily Mail reader’s worst nightmare. A perfectly civil dinner party is ruined when Kat and Walter discover a strange old man in their cellar. He is large and smelly and comes from a ‘very small country very far away’. The immigrants have landed.
There’s no room in this middle class couple’s smug, Smeg fridge existence for a foreign imposter. Things get very odd very quickly. Walter (Jermaine Dominique) has weird dreams about vegetables, Kat (Jennie Gruner) goes a bit bonkers and their son enters another world via a confession box at Church.
Marmion’s bold play explores the UK’s burgeoning paranoia about immigration, whilst also roaming off to some wacky places. It is a slippery piece, though, and Simon Usher’s direction could be more fluid. There are a few excellent and unsettling touches: the son is played by a woman (Charlotte Brimble) and a spooky soundscape pulses when Walter describes his dreams. But there are too many straightforward scenes, which feel flat and mundane in comparison.
Victoria Walsh impresses as poised but goggle-eyed shrink Liz, who’s on the verge of cracking up herself. Mike Burnside, as immigrant Liv, looks like a cross between Father Christmas and an ageing maestro. There’s something brilliantly unreachable about this performance. When he tells the couple’s son a story about a plant made up of tiny snakes, it’s hard to tell if it’s meant to comfort the boy – or keep him up all night.