In Praise of The Shed 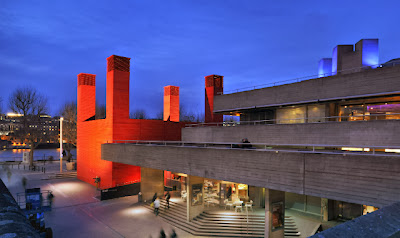 Have you seen The Shed? It’s hard to miss. The Shed is a temporary venue at The National Theatre, which is standing in for The Cottesloe whilst extensive renovations are taking place. It is a massive bright red box, made of steel and plywood, with giant chimneys rising up from the corners. It looks like a huge Christmas present, which has been ceremoniously dumped on the National’s doorstep.

Visually, this venue has always impressed me. It is a stunning structure and a brilliant calling card for Haworth Tompkins Architects. But whilst I was always sold on the visual side of The Shed, I was less convinced about the theories and ideals behind it. Prior to the Shed’s opening in April, there was a lot of wafting on about porous spaces, new perspectives and a brave new future for The National Theatre. I smelt bullshit.
A few months on, though, and the stench of bullshit is lifting! In fact, I’m really starting to believe in this venue, which was recently awarded the Peter Brook Empty Space Award for theatrical innovation. The Shed doesn’t herald a revolution for The National but it does mark a number of important shifts in the thinking behind, and outside perspective on, this crucial institution.
The physical impact of The Shed – the way in which that bright box affects the public’s perception of this ‘venerated’ institution – shouldn’t be under-estimated. The National used to be very grey, very bold and very intimidating. Over the years, the building has softened. The edges no longer feel as sharp and the grey has grown less austere. The Shed has accelerated that gradual erosion and radically updated the theatre’s overall aesthetic.
The National no longer looks like a monument to the past. The approach to the theatre feels different now and is brilliantly encapsulated in this quote from theatre critic Susannah Clapp: ‘This is a building that opens your heart before you get into the auditorium. It is a building that enables invention’.
First impressions are so important when it comes to cultural institutions. I recently went to the opening night of the RADAR Writing Festival at the Bush Theatre in West London. In a brilliant talk, David Osa Amadasun (an Outreach Development Officer interested in cultural capital in socially disadvantaged communities) discussed his daughter’s reaction to a surprise trip to The Hayward Gallery. Before the two had even reached the building, Amadasun’s daughter froze in her tracks. ‘It’s just not me,’ she said. Hopefully, the colour and cheer that radiates from The Shed will encourage a few more (rightful) sceptics to keep on walking towards the National.
On stage, the productions are beginning to reflect Britain’s shifting theatrical and cultural landscape. There have been philosophical magic shows, groundbreaking musicals andexperimental sound journeys. Young companies, such as Little Bulb Theatre, have been given space and support. All these companies have been fairly big on the fringe scene for some time and it’s brilliant to see their avid fan-base finally find a reason to come to The National.
Nut, by debbie tucker green, has just opened at The Shed and – hopefully – marks a move away from a predominantly white theatrical experience. James Baldwin’s gospel-infused Amen Corner on the National stage was a good start, as was Errol John’s extraordinary Moon on a Rainbow Shawl staged by black-led Talawa Company. This shift towards more diverse programming is crucial; The National can’t call itself National if it does not reflect the nation.
Then there is the thorny issue of female playwrights. The National has recently received a lot of flak for its poor representation of female playwrights, both over its 50 year history and its 50thBirthday Gala. Some worrying figures have emerged, such as the fact that in the 10 yrs Nick Hytner has been in charge, only 15% of the National’s plays have been penned by women. At the Shed that figure goes up to 45%.  That’s nearly FAIR, which must be some sort of record.
One last point from that RADAR Talk. Amadasun remarked that he kept receiving the same feedback following group trips to galleries in London: ‘It was if I never existed or that my culture never did.’ I am very lucky that I find my world and experiences frequently reflected at the theatre – but this isn’t the case for much of the British public. Let’s hope (hope hope) the innovations at The Shed mark the start of a broader and more inclusive cultural experience at The National Theatre and beyond.