'Three Kingdoms' review or 'Lost and found in translation.' 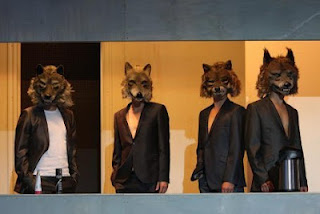 All theatre involves detective work. Regardless of genre or content, every play requires an audience to piece together the evidence and answer the question: what is this piece about? A murder mystery, then, could be seen as theatre boiled down to its most basic but essential form. This genre still asks us to find meaning – it's just a lot more open about its purpose.

What Simon Stephens has done, with his extraordinary play, 'Three Kingdoms', is to take this stripped down genre and add layer, upon layer, upon layer, until the stage is cloudy with clues and confusion. Stephens has returned to theatre's basic roots – the search for meaning – and planted new, exotic seeds. He has dug deep and, with the help of visionary director Sebastian Nübling, allowed theatre to climb and bend and twist in any which way it pleases. He has given British theatre the chance to grow.

The play begins in a fairly conventional fashion, which is perhaps why so many British theatre critics have failed to 'get' this piece, searching for the sort of coherence this play never sets out to provide. We open in a Hammersmith police station, where two British detectives are struggling with a gruesome case. They have discovered the severed head of a Russian lady, washed up on the Thames. Through their interrogations, the detectives learn this headless lady was ensnared in an international sex-trafficking ring. They travel to Germany, and later Estonia, in an attempt to hunt down the head-hacking, head honcho. The detectives' path, then, is relatively straight forward – but the production does not follow them. Instead, it scuttles along its own, insanely twisted path, packed with dark alleys and terrifying dead ends.

Strangely, this production gains its strength from constantly undermining itself. Just as the detectives, or we, might be crawling towards some sort of truth, we're teased into confusion again. Countless languages are squeezed in here – including English, German, Estonian and Russian – and, whilst the script is sometimes translated, it's often left hanging. It feels like the production is laughing at us and our measly attempts at cross-cultural understanding. When the detectives interrogate a friend of the deceased, they bring in a Russian interpreter. We can only make out the most basic terms in his fluent translations and it lends an absurd air to proceedings. This absurdity is amplified, when we discover the girl isn't even Russian and that this pathetic attempt at interpretation has been entirely futile.

Whilst Stephens' uses his script to play with the audience's instinctive search for meaning, Nübling creates a visual landscape thick with misdirections. It's as if Nübling has transported all the ambiguity of Stephens' script directly onto the stage. Almost every line is accompanied by a blitz of bizarre visuals, which rub against the scene 'proper' in mysterious, tantalizing ways. This clash between the vocals and visuals is built up slowly. At first, it comes mainly from the actors' eyes. When the detectives travel to Germany, the German detective frequently looks directly at the audience, as if he's challenging us to see things differently. As the confusion builds, the background performers – who scrub the floor with glazed eyes and traverse the stage in a endless blur of movement - all begin to stare out at us. Don't look at the front of the stage, they seem to be screaming silently. Don't look for the obvious. Maybe, just maybe, if you look beyond the surface, you might get a little closer to understanding us and discovering the truth.

As the detectives move further away from home and become steeped in a culture they cannot fathom, the stage bleeds with clues they cannot see and we cannot fully understand. An elusive 'baddy' slides through the walls, carrying suitcases packed, not with clothes, but with women. Insistent but hollow music amplifies the script in odd ways, hinting at pivotal moments the detectives fail to recognise. The witnesses become stranger and stranger until they are barely human. They don incredibly lifelike animal masks, alternately predatory creatures or prey. They become what the British detectives imagine them to be, the detectives' cultural ignorance only further complicating their case.
This play might ostensibly be about sex-trafficking but what it really explores is our inability – or reluctance – to engage with or properly interpret other cultures. This is what makes the majority of those blustering reviews even more misguided, since they are falling into the very trap this production so ingeniously sets. In a final scene, an Estonian chap sits down with a British detective and promises to show him how to create an origami swan. He holds out a sheet of paper and savagely crumples it. The other detective follows suit. 'That's not it,' comes back the coolly, frustrated reply. That swan might be a mess – but it is their own, beautiful mess and it is our responsibility to translate that mess, as faithfully and completely as we can.