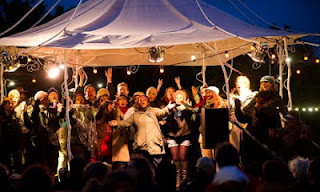 Thank God the Brits love a good old queue in the rain. In fact, the preamble to 'Babel' feels a lot like Wimbledon, as an audience of nearly 1000 cheerfully wait outside a sodden Caledonian Park. Unfortunately, just like poor old Henman and Murray, 'Babel' fails to live up to the hype.

This could've been something extraordinary. Created by World Stages London, WildWorks and Battersea Arts Centre and boasting a 300 strong cast of community volunteers, 'Babel' promised theatre on an epic scale. I was expecting spell binding choirs, eye-popping visuals and a pounding atmosphere. What we get, instead, is a good-hearted but half-baked festival, sorely in need of a headline act.

The show is split into three, frustratingly disconnected segments. The opening section is intriguing, packed with quirky, imaginative visual flourishes. As we wind through the park, strange scenes emerge from the undergrowth. White-robed creatures hover around us and makeshift homes pop up in wild, unlikely locations. Ladies iron in trees, lads read in armchairs strewn with leaves and televisions flicker behind bushes.

Distant bells begin to clang and the audience swarms towards the central field. So far, so odd and engaging. But as soon as we hit the park's centre, the spell is broken. The scant narrative is dropped and the show transforms into a hippy-friendly festival. There's a knitting stand, a new world made entirely of plasticine, a stream of street performers and, for no apparent reason, a massage parlour. It's all jolly good fun but it adds little to the show.

When the narrative finally resumes, involving a young family determined to stand their ground, it's too little too late. It's such a slight story for this grand stage and isn't nearly powerful, or clear, enough to draw the audience in. As the family is evicted, the crowd whispers in dissent but it's pretty lacklustre. It's hard to care all that much, when you're not entirely sure who or what you're meant to be supporting.

There are still some wonderful special effects here and the grand, Victorian clock towers looks splendid, lit up in all its glory. But as striking as these visuals might be – at some point a lad actually hangs off the tower – their impact is slight. The visuals come in short, meaningless bursts and, unlike the tower of Babel, never build up towards something truly majestic.