'Make Better Please' review or 'Does my penis look big in this?' 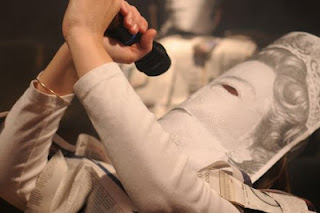 I didn't see Uninvited Guest's last show, 'Love Letters Straight From the Heart', but it sounds like it was a delicate, emotionally persuasive show. The company read out extracts from the audience's own love letters, in a thoughtful and elegant merging of private thoughts and public expression.

This company's latest venture, 'Make Better Please', is a much more jagged, complex and angry affair. It begins in a gentle enough fashion. In fact, it''s a bit like walking into a lazy, Sunday afternoon, as the audience sits in small circles, sipping tea, munching biscuits and flicking through newspapers. We're invited to identify the day's most disturbing headline and, after some tentative discussion, the groups are then combined.

Now gathered in a ceremonial circle, the groups discuss their chosen headlines. The actors then take on the guise of pertinent, political figures and we're invited to hurl questions and complains at these mute, blank figures of power. Unfortunately, this sequence depends entirely on the intensity of the audience's political passions. No doubt, on some nights, this sequence develops into a spitting, seething volley of rage. On the night I attended, it felt like a limp Question Time, chaired – frustratingly – by no one.

The company has limited energy to feed off and they do well to funnel the faltering resentments, that flicker around the circle. Chords clang, headlines are scribbled on signs plastered throughout the room and, gradually, all the horrors of the day – of our time – start to squeeze in on us. We are given masks of people who have recently died and asked to whisper their names into a pianist's ear, as he slams down his angry chords. It's a choking, disturbing moment, as we battle to honour the forgotten dead, over a clashing, obscuring soundscape.

But then the exorcism begins in earnest. Richard Duffy screams and screams, supposedly working through the audience's anger, as he staggers, stutters and spits out the names of frequent offenders: 'Cam, Cam, Cameron!' The actor's painful catharsis feels too much, though, and a gap opens between the audience and the action. This gap widens, as the warped music envelops us and the actors crack up completely, storming around with strange props, including a massive penis, attached to their flailing bodies. This raving meltdown feels so much wilder than those earlier, halting discussions and the audience seems more bewildered than bedazzled. A performance, then, that encourages respect – but not the painful, poignant recognition I was hoping for.