'The Ragged Trousered Philanthropists' review or 'Sharp performances. Shame about the script.' 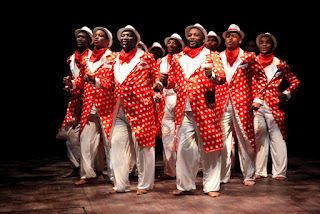 Instead, this is a company so innately musical that songs practically seep out of them. The choreography is natural and authentic, too. In fact, these South African performers pulse with so much energy, it feels like they're still dancing even when still.

If only they had stronger material to work with! Stephen Lowe has transposed Robert Tressell's classic working-class novel, first published in 1914, three years after his death, to 1950s Cape Town. The transition of time and place works fairly well. But the script just isn't meaty enough. The structure, although adventurous, is too fractured. The show feels scatty and the characters and themes grow blurred.

Despite this, some scenes still pack an almighty punch. Director Mark Dornford-May cleverly uses contrasting songs to explore the black workers' struggle. As they practise for a concert, their gospel music trembles with passionate optimism. But, when their white 'master' demands they sing the National Anthem, they shrink inside themselves, their voices unjustly silenced.