'Detroit' review or 'Plenty of smoke but where's the FIRE?' 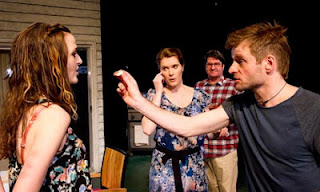 In Lisa D'Amour's new play, 'Detroit' – bafflingly nominated for the 2011 Pulitzer Prize – every prop serves a deadingly pertinent purpose. As two unlikely sets of neighbours (one couple is clean cut and the other, recovering drug addicts) share their first barbecue, they struggle with a dodgy garden umbrella. The fragile facade of friendship is breaking down! And, as the couples grow closer, the squeaky clean couple's squeaky door is fixed by ex-addict, Ben. Perhaps these two clashing couples can help each other out, after all!

Later, as the camaraderie clouds over and the couples' lives grow stormier, the furniture duly follows suit. Ex-addict, Kenny, receives a wallop from the errant umbrella. Out-of-work Ben falls right through his neighbours' porch. He bleeds: things must be getting bad. And, following a drunken dance off, the whole damn house is set on fire. That it is possible to translate this play, so fully, through the state of the props tells you just how manufactured this work is.

'Detroit' is set in an anonymous, American suburb and it only takes a few minutes, before the themes wrestle free from D'Amour's measured script. Delighted to be invited next door, ex-addict Sharon bemoans a society that is no longer social: 'I just think there's no real communication anymore.' Right, so we'll be exploring that topic, then. And I guess we'll be using two wildly contrasting couples to explore the theme! Unsurprisingly enough, the two couples – supposedly at opposite ends of the social spectrum – turn out to be strangely similar, after all.

It's all gratingly over-constructed and, even in the looser scenes, you can feel the playwright hovering right over her characters. Since the roles are so carefully defined, it's the actors who underplay their parts who express the most. Stuart McQuarrie, as failed businessman Ben, doesn't stretch too hard for our sympathies. He could've played the part as all out loser but there's some defiant strength, tingling beneath all that moping. Will Adamsdale, a comic by trade, resists playing Kenny as a stereotypical junkie and he's actually the most sensible chap on stage.

The actresses find fewer subtleties. Justine Mitchell, as strained Stepford wife Mary, has a good line in frozen smiles and false cheer but it's a role we've seen a million times before. Clare Dunne's ex-addict, Sharon, is all woozy words and wide eyed wonder. Whilst Dunne's performance complements the script it also highlights its inadequacies. This is a play that pokes at its characters; agitating them but never really doing much more than that.

It's frustrating to see such a safe play at The Cottesloe, since this is the only arena in which The National can take some real risks. Despite the quirky characters and catastrophic meltdown, there are no surprises here. Even the final set blow-out, which has been swooned over by some critics, is still terribly controlled. Sure, the set might've been blown to pieces – but the neat, green felt still remains around the edges, carefully containing the 'chaos' on stage.