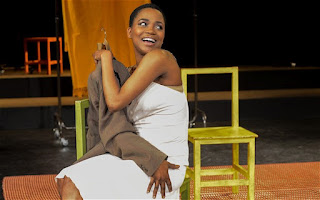 Reviewing theatre can be a tough old slog. Wading through an endless stream of shows, it’s easy to lose sight of just how moving theatre can be. Watching Peter Brook’s adaptation of Can Themba’s short story, ‘The Suit’, is like coming up for air again and seeing the sky, for the very first time.

That might sound a tad dramatic but this really is an exceptionally beautiful show. ‘The Suit’ has been running for years, mostly playing across France, but it still feels ridiculously fresh. It’s set in 1950s Johannesburg but, although it bristles with ideas of degradation and reluctant compliance, it isn’t stiff with political purpose. The show also contains a number of exceptionally sensual songs, yet it never pauses – clunkily – to make way for the music. The songs, which speak of souls crushed but not broken, are as natural a part of this show as the unassumingly poetic and powerful script.

Nothing in Brook’s finely distilled production is bigger than it need be. This is a show without spotlights. Instead, everything, everyone and every word shines naturally, at just the right time and with just the right intensity. Oria Puppo’s set initially looks underdone, as if it’s had the stuffing knocked right out of it. The chairs are wooden and bare. An empty clothes rack stands back stage. A suit, limp and unused, lies on a chair. In fact, the most extravagant prop is the musicians, who flow across the stage and occasionally seep into the scenes ‘proper’.

The set might be bare but it perfectly captures the context of South African in the 50s. The clothing rack alternately represents a bus-stop, a train, a street and countless other locations. It perfectly encapsulates a world that offers its black inhabitants little and demands much in return. As the narrator remarks, this small town ‘is not pink and pretty…What made Sophiatown was its people.’ Indeed, for devoted husband Philemon (William Nadylam), what made Sophiatown was his preposterously pretty wife, Matilda (Nonhlanhla Kheswa). When he discovers her infidelity, his shaky world – full of frames that can be filled in only with the imagination - suddenly appears empty. A harsh world that was made bearable by love has been blanked out and blackened by his wife’s betrayal.

Nadylam, as Philemon, is utterly compelling. His performance suggests so much but confirms so little. Nadylam’s Philemon is a man who keeps his feelings hidden and deals with his emotions in dramatic, surprising ways. When he discovers his wife’s affair, he calmly orders her to take care of her lover’s suit. From that point on, every word Philemon utters seems to be beating down a storm of emotions, which occasionally flash free from his eyes.

The exquisite music also allows the actors to express themselves with the type of intense authenticity, you’ll rarely see on stage. The singing is exceptionally powerful – but only because it feels humble and honest. It’s impossible not to believe and feel every word the actors sing.  All the singers are phenomenally talented but Kheswa, as Matilda, is something else. Theatrical songs usually embellish a character. Here, the songs are the character.

Amidst all this, Brook still finds time for humour, with some silly sections involving actors in Monty Pyhtonesque hats, as well as some carefully orchestrated audience interaction. Each shift in tone is nailed with delicate precision. It’s never hard work and yet it’s still a draining, wrenching experience. Stirring, disturbing, spell-binding stuff.