'Hitch' review or 'Did anyone remember the travel sweets?' 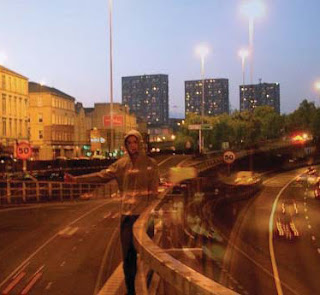 Ah, the humble human thumb. That tiny appendage that sets us apart from mere beasts. An appendage so great, Montaigne wrote an essay about it. Hell, if we're really pushed, a thumb can even transport as halfway across the world. Kieran Hurley knows a thing or two about thumbs. In 2009, Hurley travelled from Glasgow to L'Aquila in Italy, to join the G8 demonstrations. All he had was his outstretched thumb and a ratty cardboard sign, reading South.

As Hurley introduces his show, he salutes the audience with a raised thumbs up. With a flick of his wrist, he flips his thumb into the stiff stance of a hitch-hiker. It feels like a blessing. It also neatly encapsulates the meaning of this show; the idea that one tiny movement can inject an entire audience with optimism. The idea that we can all make a difference – if only we try.

That might sound bloody cheesy but this is not a schmaltzy show. In fact, with its indy soundtrack and quirky details, 'Hitch' has a whiff of the Wes Anderson film about it. Hurley initially teases us with obscure but tempting glances at his travelling companions. Slivers of phrases suggest extraordinary, hulking characters, all bonkers and bursting with life. At first, they're just silhouettes. But as Hurley travels nearly 2,0000 miles to his final destination, these shadowy characters begin to glow.

Hurley also builds up his own character, alongside his livelier and more confident companions. 'This is me,' he says as he stands, stiff and frightened, at the side of the stage. At the beginning, he crouches whilst he talks. As he grows up – this is coming of age story at heart – he stands upright and speaks strongly. Moments that really touch and strengthen him, are whispered heavily through the microphone.

Hurley never pushes his message too hard and channels his ideas through his own, stuttering but steady personal development. He does not explicitly condemn the hypocrisy of a G8 meeting, held in a town ravaged by an earthquake and neglected by the authorities. Instead, he uses his faltering hopes and ideals to explore a world – a world of leaders – that have let him, and us, down.

When Hurley reaches Rome, he eagerly seeks out his fellow demonstrators at a central piazza. There, he is he is met by rows upon rows of policemen, their shields held aloft. The protesters Hurley hoped to stand and shout alongside, have been frozen into silence. The abject disappointment etched on Hurley's face is heartbreaking. It makes one ashamed to live in a world that does not allow this smart, sensitive lad to speak out. But it's heartening too. Hurley might've been silenced in Italy but theatre, if only temporarily, has given Hurley a voice – and what a fine, persuasive voice it is, too.