'Crunch' review or 'A show with some serious cashback.' 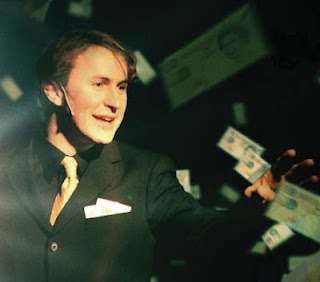 I normally loath theatrical lectures. But Gary McNair is no starchy, self-righteous professor. He might be teaching us about economics but he's also a damn sharp showman. Dressed in a shiny black suit and boasting some seriously slicked back hair, McNair looks a bit like a young Paul Daniels. Only, McNair isn't trying to make rabbits disappear. He's trying to obliterate money.

McNair kicks of with an impressively lucid narrative on the history of money and the emergence of currency. With a few deft strokes, McNair describes the transition from stone age transactions ('Who wants this ere carcass?'), to the first discovery of gold and the eventual adoption of paper money. He makes economics entertaining. As he 'teaches', we do not lean back but forwards, engaged by his easy charm and accessible insights.

Having established an easy trust with the audience, McNair pushes his show in weirder directions. It all gets a little interactive and we're encouraged to learn with him, not from him. McNair offers a trade. He presents an envelope of money and invites us to bid for its contents. Immediately, a steely sense of competition surges through the audience. The prospect of a 'win' in front of us, we instinctively work against each other. Once held together by mutual laughter, we are now pitched against each other, the prospective of personal gain instantly extinguishing that hard won, community spirit.

When an audience member finally wins the envelope, McNair asks: 'Who was happy for this girl?' Some kind-hearted spectators raise their hand. 'Now, who thinks she's a bitch?' More hands are raised. Money doesn't make us very nice, does it? McNair then proposes a new system; a new way of life, in which we are not beholden to money. It all sounds jolly nice in theory and, as we bleat out McNair's new code in harmony, the audience binds together once again.

Obviously, McNair's suggestion – break free of money's impossible grip – is mostly just fantasy. But it is still a fantasy that gets us thinking and, coming off the back of such an intelligent introduction, it holds some weight. But when McNair attempts to put his theory into practise and invites the audience to shred their own money, the wheels fall off the wagon. No one is willing to put themselves, or their cash, on the line. This is a show that encourages us to dream the impossible – but doesn't quite inspire us to turn that dream into a reality. Damn us stingy Londoners.