Theatre that makes me want to write about theatre


When I was younger, I didn’t want to write about theatre. I’m not sure any 12 year old does. Instead, I fell in love with almost all the leading men (and women) in every show that I saw. I wanted to join them on stage and, if at all possible, marry them. Especially Phantom. I really, really wanted to marry Phantom. So I didn’t want to write about theatre, I wanted to marry it. Those musicals that I devoured when I was younger didn’t feel like something separate or removed; the characters came from a very real and reachable world that I wanted to take part in. For some time, I thought I wanted to be an actress, but I suspect that was more to do with the ‘marriage’ bit rather than my own acting skills, which were woefully lacking.
As I grew older, I worked as a stage manager and thought I might, perhaps, want to become a director. I wanted to work inside a show and help change and develop it. Again, what I wanted above all was to get close to a show; to work my way beneath the words in the script, figure out what they might mean and do my very best to translate and express those meanings on stage.
It was only after I left University and had been working for some time that I realised I wanted to write about theatre – but that longing to get close to a play, to get up on the stage itself, has never left me. The theatre that makes me want to write about theatre is the theatre that feels so physical, so startling and close and powerful, that it might be a punch blasting me in the face, a lover telling me they want to spend their life with me or an icy breeze quietly wrapping itself around me and settling right beneath my skin.
The shows I want to write about affect me physically. Take Beckett. Some might think of Beckett as a peculiarly cerebral writer but, for me, Beckett is as visceral as it gets. When I saw Not I at the Royal Court, I felt like I had been physically transported to the very (admittedly made up) spot in my brain where all my darkest fears cluster. I felt I had been taken deep inside myself, so much so, that it was almost as if my body had ceased to function and I had died. When the show finished, and Lisa Dwan’s hovering mouth dissolved into the shadows and vanished forever, it took me some time to feel connected with my body again. It was as if I was hovering above things. This is a sensation I have experienced over and over again after seeing Beckett’s plays. It is as if Beckett has observed and expressed life and human emotion so well that to actually exist no longer feels particularly relevant. I always find myself removed from myself after a brilliant Beckett production but also acutely tuned into other people’s lives. My senses are heightened and, instead of living inside myself, I flit between the lives that pass by me, imagining each person’s secrets and stories. A powerful Beckett production makes playwrights of us all, if only for a few minutes following the show.
Other shows that have propelled me towards my laptop, desperate to translate the tremors or shocks coursing through my body? Sweeney Todd. After seeing Michael Ball and Imelda Staunton spark off each other and all-but smother the audience with their souls, the passion and fury vibrating through Ball’s voice in particular, I felt like I wouldn’t sleep for years. And the swell of Sondheim’s chorus is a bit like having your private doubts and fears multiplied, amplified and blasted directly into your face. A superlative musical can rarely be beaten for impact because it seems able to attack and affect you from all quarters. There are more angles and more access points with musicals, more ways to wriggle under your skin and massage your heart. 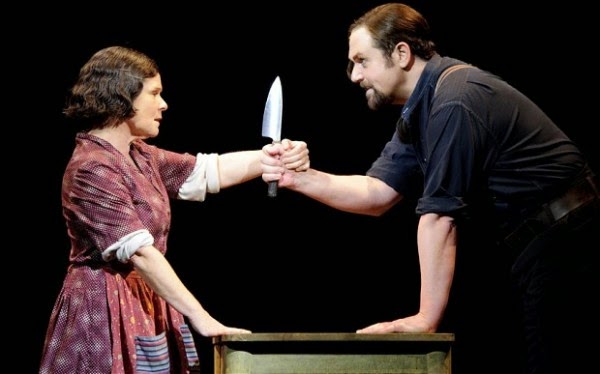 The other shows that I could not shut up about? Simon Stephens’ Harper Regan, performed with such bare honesty by Lesley Sharp. I felt like I had never got closer to a human being in my whole life, either on stage or out there in the real world. I felt like I understood humans better, after seeing that show. Ivo Van Hove’s recent production of A View From A Bridge; it was if the characters had been skinned alive for our viewing pleasure. David Suchet’s performance in All My Sons. Fuck. That raw scream from Suchet as it all goes to hell, his thundering defiance and despair, ripped right through my eyes. I couldn’t stop crying for hours.
Other works? Almost every production of West Side Story I have ever seen. One moment in particular always compels me to write; the moment when Tony is shot and the audience, without fail, giggles. What is it about human beings that, always always, urges them spontaneously to laugh away their fears?
The variety in this collection of memories is awesome, inspiring and, I believe, unique to theatre. I’m just as likely to be thrilled by Chris Thorpe’s and Chris Goode’s narratives – writing so honest that it feels like it has been written from inside the characters’ skin – than I am by some big blasting song from Sweeney Todd. I’m just as likely to come out blabbing with fear after Chris Brett Bailey’s This is How We Die, tingling with shock after Alistair’s McDowall’s dystopian tumble Pomona or stunned into a warped period of reflection by Kim Noble’s fearless show You’re Not Alone. I’ll want to talk for hours about War Horse and the moment when the ‘puppet’ horse raises his front legs and all the artifice in theatre melts away for second and becomes reality.
The only thing these shows have in common is that there will always be a moment after a brilliant production when the world falls silent. You will find me sitting in my chair, attempting to come to terms with what I have just seen. My body literally will not move immediately after a stunning production. It is as if the show is still wriggling through me, my insides ever so slightly re-aligning and so that when I finally find the strength to stand up and leave, I have changed – inside – for good.