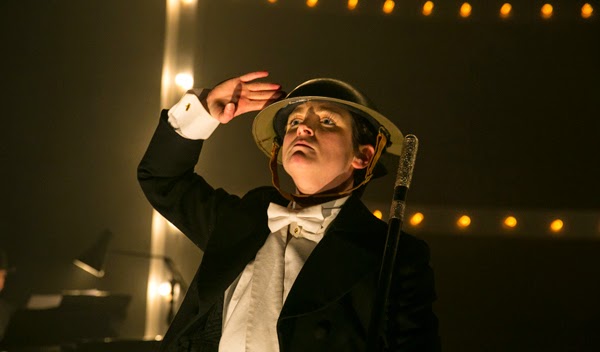 Goosebumps are a very handy tool as a critic. Feel them a few times, and you know that a show has got something. There are a few scenes in Joy Wilkinson’s commemorative play, ‘Britain’s Best Recruiting Sergeant’, that set the skin tingling. One is when musical hall singer Vesta Tilley sings ‘Daisy Daisy’ and the past, bound up in that famous number, comes rushing at us. Another is when, after the outbreak of World War I, Vesta dons a soldier’s helmet and begins to sing. These are moments that vibrate with meaning and memory. The rest of the play? Well, it’s a little ploddy to be honest.

The cast of four are also performing in the Unicorn’s other main play, Brecht’s ‘The Caucasian Circle’. They seem at ease with each other and there is a nice loose feel to director Lee Lyford’s no-fuss production, as the actors rummage about for props and instruments and rattle through a few songs. That’s a relief, to be honest, because Joy Wilkinson’s script – although very solid and well researched – is a bit stiff and even a touch patronising in places.

We begin with young Vesta Tilley (Emily Wachter), aged four and already desperate to join her father Harry (Tom Espiner) in his Musical Hall act. A narrator – a very glamorous lady in a bright red dress and sparkling jewellery (Mia Soteriou) – accompanies Vesta on the piano and frequently interjects with extra information and anxious predictions. Often, the narrator (who we quickly realise is an older version of young Vesta) spells out what young Vesta is feeling. It is always a worrying sign and ultimately a disappointment when a writer feels the need to point out the emotions in play.

These interjections, and a general air of ‘careful’ story-telling, slow down the production. We watch Vesta become a star of the Music Hall and then, as the war breaks out, use her shows to help enlist young British soldiers. On the eve of the outbreak of war, the narrator ominously warns us that things are going to turn sour. Well, yes, we got that! A lovely soldier (Caleb Frederick) spends a lot of time begging Vesta to come and sing at the front, whilst Vesta preens about on stage. Smoke swirls about the soldier and he appears behind a gauze screen. What might possibly happen to him? One can see the plot twists coming a mile off and it sucks the drama right out of the things. The show is 8 years plus but these kids are smart. They don’t need to be talked down but sometimes (and this happens so rarely at the Unicorn) you can feel the script straining very hard to be simple.

The show and performers are much livelier than Wilkinson’s hard-working script. There’s a beautiful romance to Hayley Grindle’s set that reads like a love letter to the theatre. A huge line of light bulbs frames the back wall of the stage. They remind one of the mirrors that actors have in their dressing rooms and feel nostalgic and dreamy. When the War begins, those light bulbs turn harsh and jolting and the dry ice, that felt magical during Vesta’s performance, turns threatening.

Emily Wachter is a bundle of charm and energy although, it has to be said, the singing isn’t brilliant in this production. There are an awful lot of Musical Hall numbers and Wachter’s voice – bright and colourful as it is – sounds knackered. Same goes for Tom Espiner, who plays Vesta’s father. Espiner has a brilliant line in waggly eyebrows and barely-restrained cheekiness but these musical numbers could’ve been even bigger, brassier and over the top.


Nevertheless, it’s still a pleasure to see Musical Hall performances on stage – it’s such a rarity nowadays and is an important part of our performing history. There are some properly provocative moments too. When Vesta decides to ‘do her bit’ and use her act to help enlist the soldiers, her performance takes on weird and sinister edge. The smoke billows about and Vesta, beaming and untroubled, enthusiastically encourages her audience of young men to sign up for the war. It is very strange to watch this woman dressed as a chap smilingly nudge these men towards their graves, her stiff movements just a whisker away from a soldierly march.