'Behind the Beautiful Forevers' review or 'Have you taken the rubbish out?'

Behind the Beautiful Forevers, David Hare (based on the book by Katherine Boo)
National Theatre, 24th February 2015 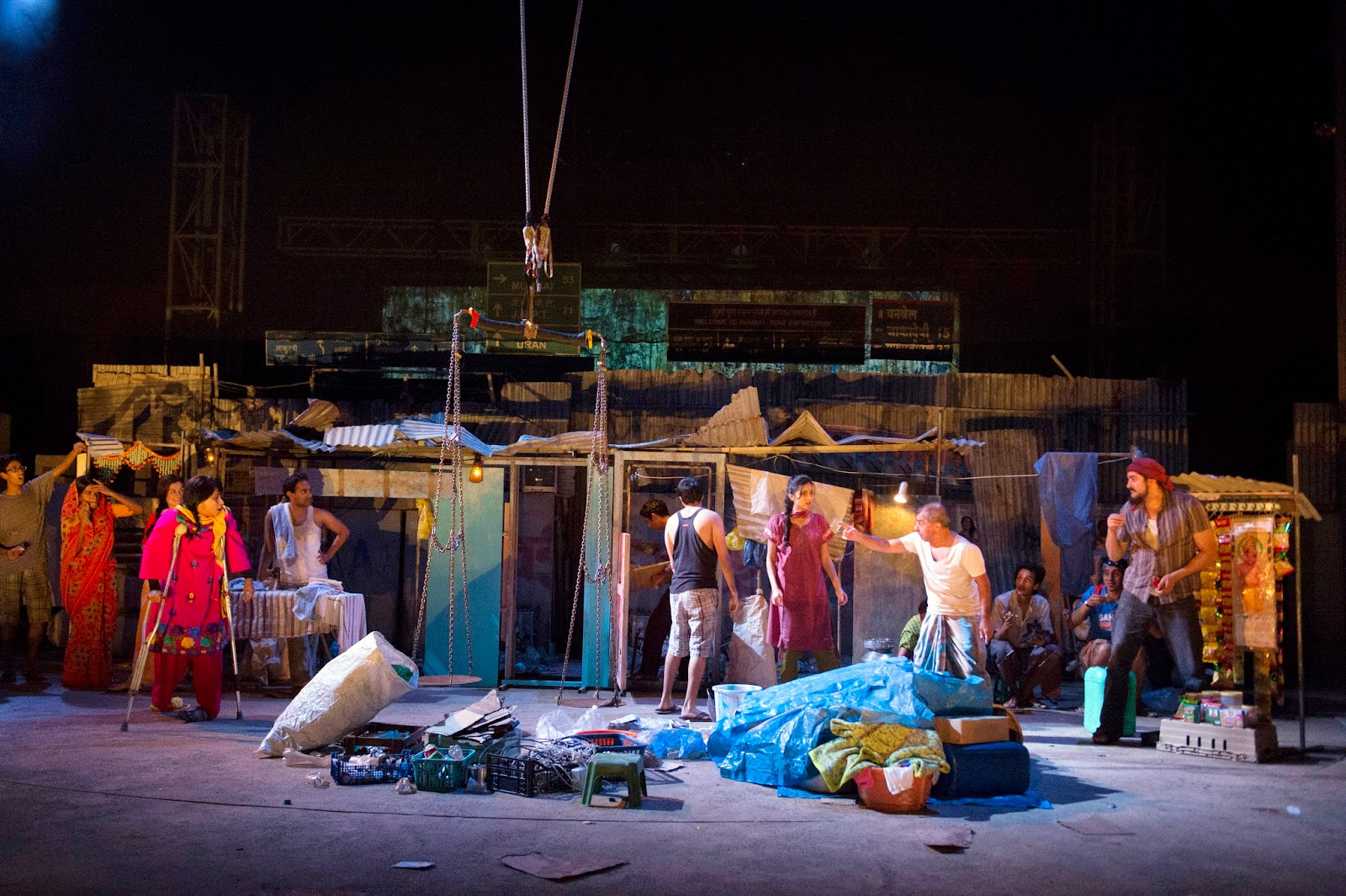 David Hare has adapted ‘Behind the Beautiful Forevers’ from journalist Katherine Boo’s book (in turn based on real-life interviews) – and boy can you feel that source material in the opening scenes. One can practically hear the pages of Boo’s book being carefully flicked through, as the characters – who live in the outskirts of Mumbai airport – patiently introduce themselves to the audience. The dense source material hovers over the second half, too, as one too many plot threads are rather anxiously tied up. But despite these faults (and it’s frustrating that many reviews do not mention how scattered and demanding this show is) there are some striking scenes packed in here, which provide a provocative glimpse into life on the outskirts of Mumbai.

Rufus Norris, soon to take over the helm at the National, directs with a steady hand, although his production feels a little too tidy and restrained. ‘Beautiful Forevers’ could have been dirtier, closer, harder to neatly step away from. Katrina Lindsay’s design is sketchy, respectful and removed. We get an impression of what the slums look like – with a few corrugated walls lined up beside each other – but we never get inside. Much of the production unfolds in a barren space outside the slums, with litter scattered about and the billboards of Mumbai airport looming overhead. It feels like watching the whole thing through a long-focus camera and never quite shifts from a cerebral to a sensory experience.

The show takes some time to warm up. We are systematically introduced to a stream of characters, a combination of rubbish pickers, thieves, ‘go too’ women, young girls and corrupt officials. It’s hard to stay inside the play with so many characters constantly stepping out of it. Almost all the strong characters are women. Meera Syal (sensitive and restrained) plays Zehrunisa Husain, whose family – including loyal son Abdul (Shane Zaza) – are the best rubbish pickers around. They are beginning to establish themselves and Zehrunisa is determined to decorate her house with tiles, which read ‘Beautiful Forever’. We meet ‘fixer’ Asha Waghekar (Stephanie Street), who has made a fine living out of oiling the wheels of corruption among the local officials. And amid much screaming and bitching we meet Zehrunisa’s neighbour, Fatima (Thusitha Jayasundera, a firework of an actress), a disabled woman who has practically curdled with jealousy over her former friend’s success.

The first half focuses on Zehrunisa Husain, her son Abdul and their downward spiral, which is kicked off by a shocking act of sabotage. It feels like we’re gearing up for a taut tragedy, in which Zehrunisa – with just a hint of Mother Courage about her – is driven ragged by an endlessly multiplying stream of corrupt officials. But that tragedy never quite materialises. Instead, we get dark flashes from a cluster of would-be plays; it is the kind of sprawling piece that many will breathlessly label ‘epic’, but is in reality slightly over-burdened and out of focus.

Still, some of those flashes are really quite fierce. One of them is literal: there is a scene of self-immolation that is just brutal and harrowing. There are a series of encounters between two young girls, Manu (Anjana Vasan) and Meena (Anneika Rose), who secretly meet in the toilets and carry out an education that their parents, and society at large, does not want for them. Their quiet determination to broaden their minds, despite all that pressure pushing against them, is inspiring. 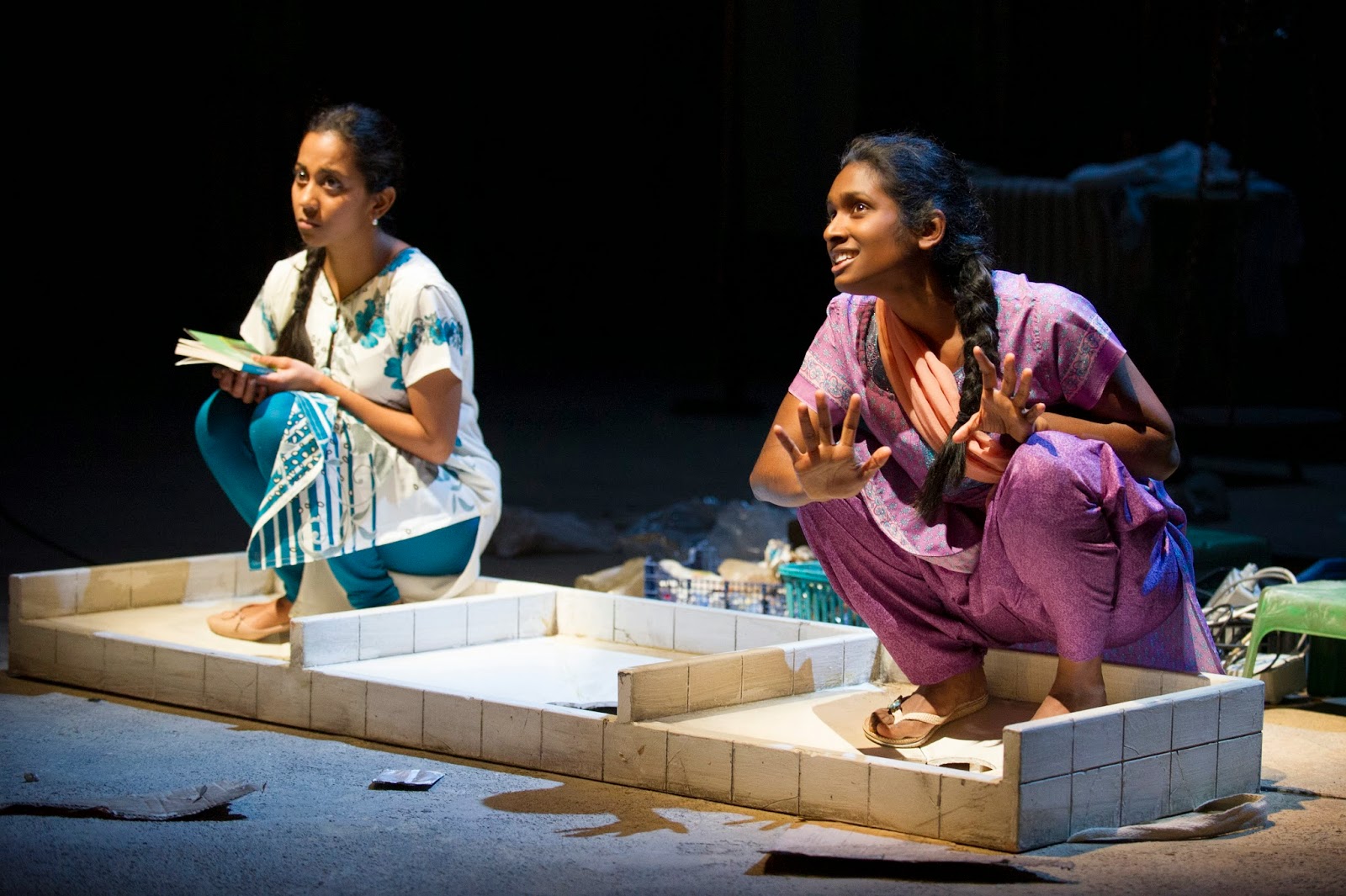 There are some visual moments with equal impact, although not enough. Rufus Norris introduces some interesting visual motifs; technological progress, in particular, has a weird and threatening glint about it. Every time a vehicle appears – a bike, a car or a plane – it is loud and huge, alien and dangerous. And the final scene is really something. A young kid clambers onto a bridge and prepares to take a potentially lethal jump in order to reach some rubbish, just out of reach. In the theatre, a platform below protects the actor from his fall. In real life, though, there is no safety net.