'How to Hold Your Breath' review or 'I'll tell you this - he's a devil in the sack.' 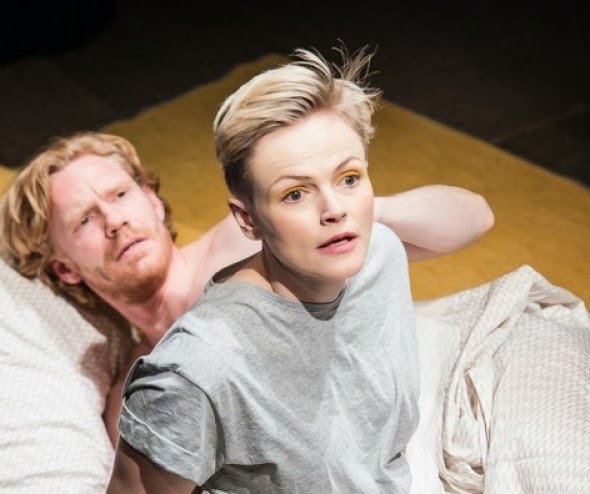 You can always tell when a show is working, because the audience feels like it is reacting as one. But when I was watching Zinnie Harris’ new play, ‘How to Hold Your Breath’, the audience was fractured. People around me were forcing out laughs at strange moments, others seemed bored, some were (and I didn’t really get this) shocked and a rare few were rapt. But this strangely vague play about two sisters whose lives are sent spiralling after one is ensnared by a demon and both are caught up in a second financial collapse in Europe is a little all over the place. Is it a pointed satire? Is it a surreal fantasy, loosely tethered to reality but sumptuously dramatic too? A bit of both, I’d say.

Maxine Peake’s last performance was as Hamlet at the Royal Exchange and I’m not convinced she has entirely shaken off this role. Peake is an exceptionally forceful actor but this is a slippery play and Peake attacks the dialogue a little too vehemently. I kept thinking – ‘My, she’s projecting!’ – and that is not a good sign. It points to a performer who hasn’t found a way to sit comfortably with her role.

The first scene in Vicky Featherstone’s production feels a little off, stuck somewhere between a fairly straight forward exchange or something much darker and weirder. Again, it ends up being neither one nor the other. Peake, who plays European academic Dana (at least I think she’s an academic – all the details are a bit smudged) wakes up in bed with UN worker Jarron (Michael Schaeffer – a bit like an evil Richard Branson). The two have just had a one night stand, but it quickly turns out that Jarron is not what he seems. No. Jarron is a demon; ‘I’m a devil, a demon, a thunderclap.’

Very quickly, Dana’s cosy life... (is it that cosy? I’m not sure. The details about what came before this great upheaval are very hazy)... anyway, Dana’s possibly quite cosy life starts to unravel. So too does that of her quirky sister Jasmine (Christine Bottomley), who has recently found out she is pregnant. The two decide to travel together to Alexandria, where a job interview and the promise of gainful employment awaits for Dana. Only Dana has refused to play nice with ‘thunderclap’ Jarron and, en route to Alexandria, Europe slides into another financial crisis and everything goes to hell.

The two sisters spend a lot of time naively assuming that everything will be OK, presumably mirroring the way that we all might be blindly walking towards another financial disaster (‘I thought this was Europe!’ or ‘Why are we so calm? Because this is Europe!’) I get the message but the way that the message and drama tie together is really quite strange. I mean, things are really very, very bad for these two sisters. They’re trapped in the middle of Europe, their credit cards have been cancelled (presumably by thunderclap Jarron or perhaps it’s just down to their own unthinking ignorance) and pregnant sister Jasmine is not in a good way. If there was ever a time to panic, this is it. But the message of the play demands that these two comfortable Europeans stay calm and trust in something that has actually been broken for a very long time. I see the point that is being made but, in the context of the drama and the real characters involved, it doesn’t really work.

There is just something about this production that, despite some very sharp and provocative moments, doesn’t quite gel. Chloe Lamford’s set isn’t always hugely helpful. And it doesn’t feel like the design fills the stage space very well. Bits of furniture are strewn about the stage and used at various junctures to represent different rooms and spaces. But, like the tone of this piece, the set feels a bit fuzzy. It took me some time to notice that some pieces of furniture have ‘Sale’ signs stuck on them. Is that means to foreshadow Europe’s downfall? I don’t know. The actors, too, look a bit lost in this too-open space. I spent a lot of time thinking how small and far away these characters were. Again, not a great thought.

Things do improve when the play turns stranger, bigger and more perverse. All that furniture, that wasn’t really doing much, is stripped away and the space, text and atmosphere start to feel a bit more fiery and threatening. Peake’s high voltage performance stops feeling out of place and starts to make an impact. Any semblance of reality is cast off and this play becomes a looser yet somehow more detailed and dramatic piece. It stops trying to refer back to things and starts to settle into its own frightening new reality. Teachers turn into prostitutes, Dana is forced to sell her body to stay alive, wild storms brew and legions of people are sent tumbling into the ocean. Things get scary and, rather than being warned of the shit storm that might be approaching, we begin to feel it.