'Songs of Lear' review or 'An inner body experience.' 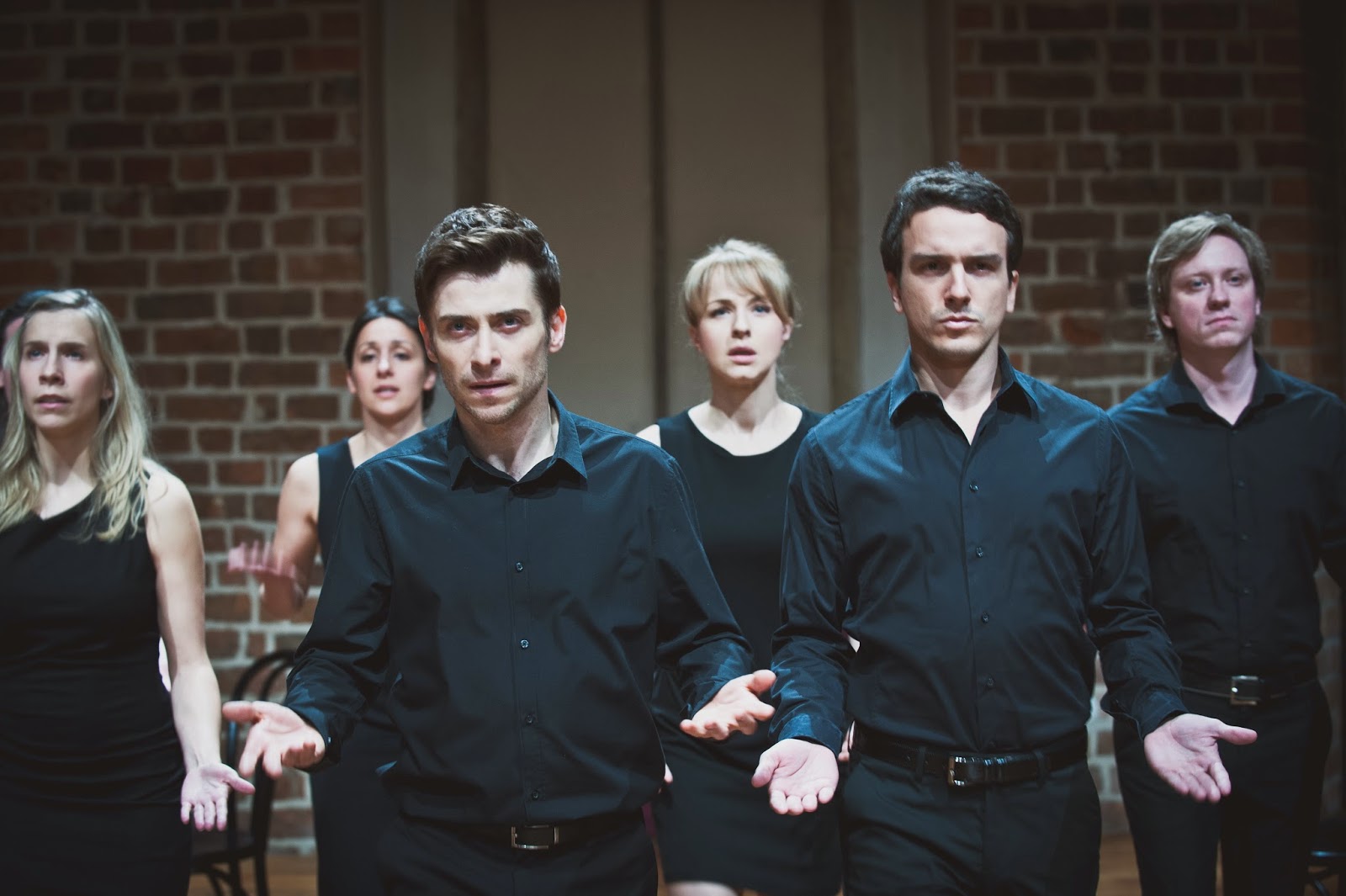 Imagine going to a performance of King Lear, only you are very, very sleepy. Imagine falling asleep during that production and being haunted by the fiercest moments in Lear, dreaming your way through the show in a hazy but intense confusion. That’s what ‘Songs of Lear’ feel like – and it’s utterly distinctive, inspiring and occasionally downright beautiful.

‘Songs of Lear’ is from Polish theatre company ‘Song of the Goat’ and has been going for some time, since Edinburgh 2012. Audiences and critics have been frothing at the mouth about at it – and with good reason. It’s a choral re-imagining of King Lear, rooted in Corsican chanting, which uses polyphonic singing (think pure lines of music making love with each other) to realise some of the key moments in Lear. This isn’t the full works; it’s King Lear, The Highlights, delivered directly to the centre of your body.

The piece is framed by director Grzegorz Bral, who introduces the show as an ‘exhibition’, a collection of sketches inspired by Lear rather than the complete picture. In between each choral number, Bral tells us the title of the next piece (they all have beautifully wistful names like ‘Cordelia’s lament’ or ‘Fifth Voice of Angels’) and gives us a little context. He provides the show with some structural support and also allows the audience and actors to take a breather in between these boiling blasts of emotion.

The ten-strong cast stand about in a half circle, dressed in black and a chair in front of each of them. Maciejy Rychly – who wrote the music along with Corsican composer Jean-Claude Acquaviv – stands by the side and plays a range of folk instruments, one that sounds like a cross between a piano and an accordion, the other that sounds like a gentle bagpipe (a seirszenki). Bral directs each piece from the side of the stage, trembling and jittering about with every soaring harmony or clashing, brutal climax.

There’s a gentle opening piece, which allows us to adjust to this unusual style of singing. The actors gentle pile their harmonies on top of and through each other, gradually building up a stunning lattice of sound. It sounds like an awakening and, without much to anchor us at this point (the associations with Lear are very loose at this opening stage) this early song is a bit like nature awakening. It feels like walking through the forest and everything instantaneously coming into bloom, privately and coyly – for your eyes only. As those gentle, pure notes build and merge, it feels the sun rising or the ocean rippling. This is the beginning of an exceptionally generous show, which might be loosely tethered to Lear, but is also open and robust enough to allow the audience’s thoughts to wander and deeply personal but meaningful connections to be forged.

That opening segment feels a little like being brainwashed and, for the rest of the show, one isn’t really inside the Battersea Arts Centre. You’re outside and beyond, your thoughts being quietly massaged or violently jolted about by the actors’ forceful, soulful performances. Interestingly, my sight went completely squiffy throughout this show. ‘Songs of Lear’ is a sensory performance but it’s not a particularly visual one. Often, I found myself closing my eyes, and at other times I found my periphery vision blurring and my gaze focusing, instinctively and stubbornly, on the central performer.

That singularity of focus is one of the awesome strengths of this production and it applies to the content, the performers and the audience’s reaction. The show is pinned together by a collection of ever decreasing circles. So, the actors are acutely focused on, almost physically attached to director Bral. When he conducts, as he frequently does, it’s as if the actor’s bodies are connected to Bral’s fingertips. But this focus doesn’t just exist within the company, it’s also directed at the text and helps to highlight the key emotions, characters and transitions in Shakespeare’s play. The actors pour their concentration into whatever might take on central importance at each moment. When an actor takes centre stage – be that Cordelia singing a lament, Lear roaring out his rage or the Fool babbling madly – all the actors and all their eyes hone in on this one key figure. As the peripheral figures sing, all staring intently at the central figure, it’s as if every note is being fed through and then translated by the actor centre stage; as if all Shakespeare’s subtext, walk-on roles or wider themes are being used to pack out this character, paint in the tiny nuances, and help the audience understand this character, this moment, in all its minute complexities. So there might be only small segments of Shakespeare in this show but they’re stuffed full with meaning and context.

Finally, there is the cool focus of that polyphonic singing, which feels like music with all the pointless stuff – the embellishments, the trills, the fancy changes in tempo – stripped away. This is absolutely essential singing and I’m not sure I’ve ever heard a more essential singer than Monika Dryl, who helps bring Cordelia to life, then death. Dryl’s is one of the purest voices I’ve heard; deep and clean and totally truthful. When she sings Cordelia’s lament, it’s as if every note has been hauled up from the very depths of her body and filtered through her heart. And that’s the best way I can think to describe ‘Songs of Lear’; Shakespeare pulled up through the body and sung straight from the heart. 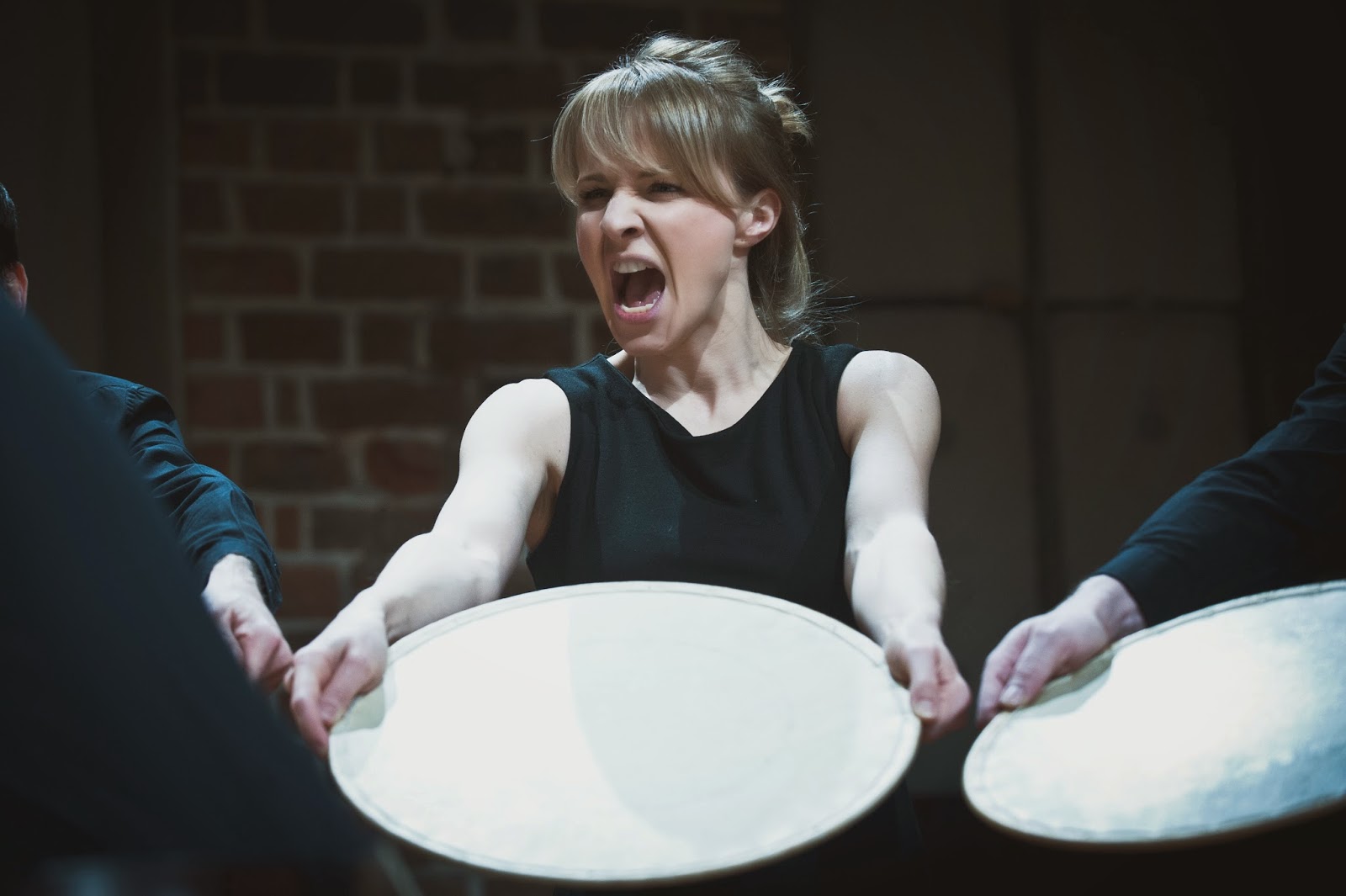