'Alice's House of Cards' review or 'Where's the joker in the pack?!' 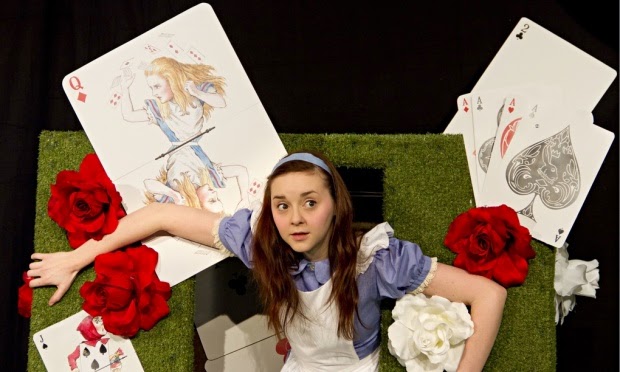 Giant playing cards dangle from the ceiling. There’s a magician on stage, calling out to an enthralled audience: “Who likes puzzles?” Some kids are playing croquet; others are whizzing about with their faces painted as butterflies and lions; the braver ones have taken over the mini wendy houses. It’s the Imagine children’s festival and Southbank is seething with excited kids, endless activities and piles of jelly and ice cream.
My goddaughter Blue and I are here to see Alice’s House of Cards, an immersive show for young children. Blue has solemnly informed me that she has listened to Lewis Carroll’s Alice in Wonderland many times on tape and knows the story inside out. That’s lucky, since anyone without some basic knowledge of Alice in Wonderland would be bewildered by this disappointing and convoluted show.
Directed by Katie Henry, the show focuses on just one episode in Carroll’s sprawling fantasy: the trial of the Knave of Hearts, who stands accused of stealing the Queen’s tarts. It should have been a relatively self-contained story but the script is so fractured that it feels like we start halfway through and finish a few beats before the end.
Even the explanations are confusing. At one point, Alice (played with wide-eyed charm by Evelyn Hoskins) tries to clarify the meaning of the word trial: “A trial is where you decide the outcome of an event...” The kids’ eyes gloss over with the word “outcome”. One particularly cheeky child cries out, “What are you on about now?”, and the parents exchange wry smiles.
The actors give it all they’ve got but it is very hard to engage with a mystified audience. Ben Ingles is lumbered with playing almost every single character in the book, often at the same time. Aided by some fluffy ears and a battered hat, Ingles plays the Mad Hatter, White Rabbit, March Hare and countless others I struggled to identify. He stretches his face into as many nutty expressions as he can muster, but he essentially looks like a chap talking to himself. The script just isn’t tight enough to handle such tricky manoeuvres and lightning-quick character changes.
Caroline Russell’s set includes a pyramid of cards and a small decorated box (all the better for Alice to shrink and expand in) and makes for an attractive distraction. There are some attempts to interact with the young audience but even these, such as the caucus race, are highly confusing. The kids end up jogging about on stage, bemused expressions on their faces. I can feel Blue’s attention waning and, at one point, I notice she’s more enthralled by the transparent lift, carrying passengers up and down the Festival Hall. If only the show had been an equally uplifting adventure.