'The Eradication of Schizophrenia in Western Lapland' review or 'I'm not sure you're really listening.' 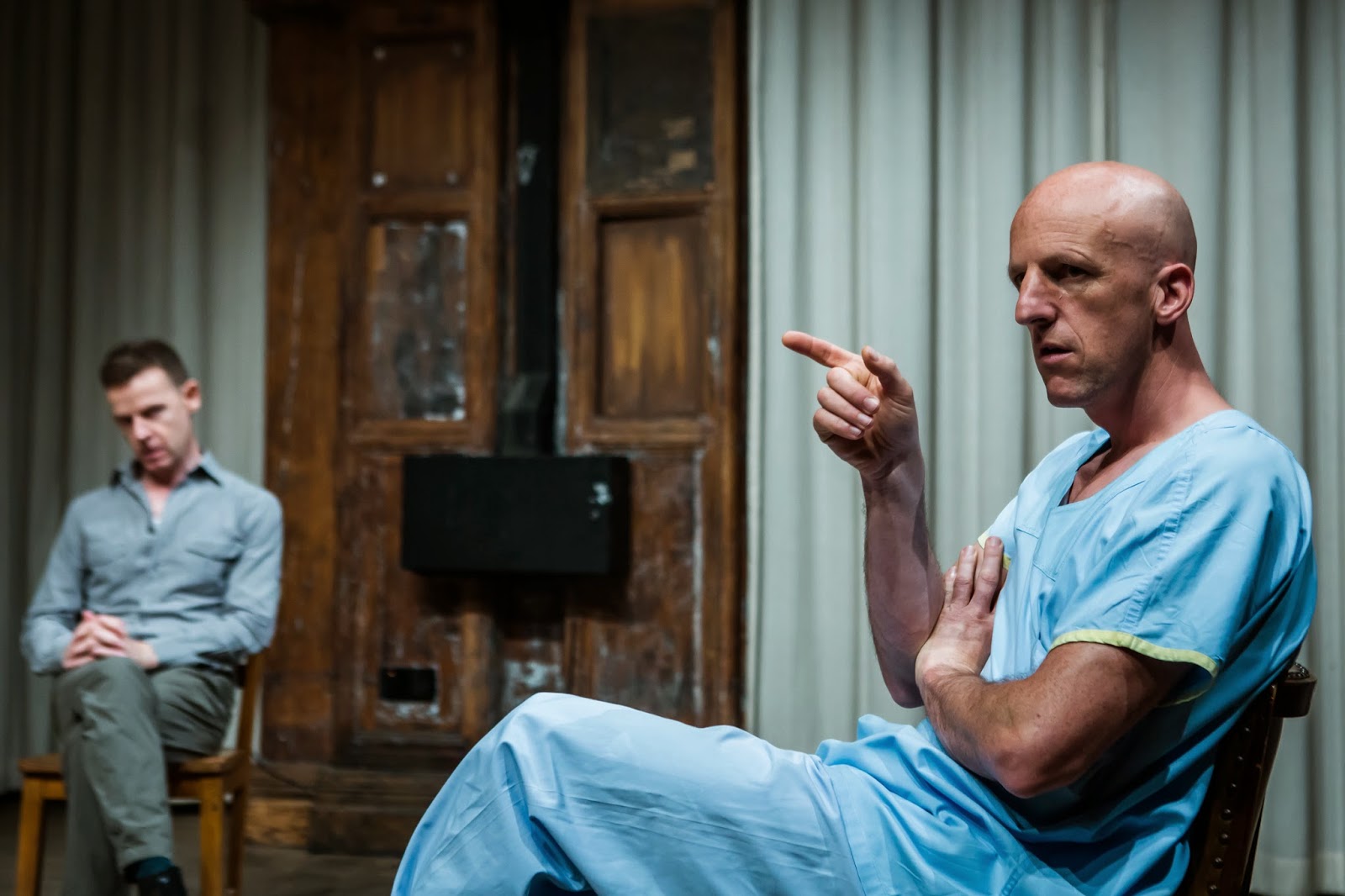 There’s a very anxious looking lady, who looks like she is wearing her daughters clothes and keeps going on about Mediterranean vegetables. I think she might be going a bit mad. Her son thinks the MI5 is after him. I think he might be going mad. The doctor, with whom the son is talking, is having visions. Perhaps he’s going bonkers – and I’m not even sure if that other chap is alive. Am I going mad? Welcome to ‘The Eradication of Schizophrenia in Western Lapland.’

I’ll tell you one thing – probably best not to go to this show when you’re feeling pretty ill. ‘Eradication’ will tip you clean over the edge. Also best not to go if you can barely hear in one ear (which is my lot), as it’ll make the whole idea of ‘hearing voices’, which is explored very cleverly in this show, all the more confusing. In fact, steer well clear if you’re not up for a challenge. But if you want a show that will rip you from your comfort zone and help you understand and even temporarily experience schizophrenia, then scoot on over to the BAC.

Apparently schizophrenia has been all but eradicated in Western Lapland. This is down to a radical decision (inspired by the philosopher Mickhail Bakhtin) to avoid medication and instead engage in ‘open dialogue’ and work with the voices and confusion that schizophrenia creates. ‘Eradication’, created by Jon Haynes and David Woods and their company Ridiculusmus, is the theatrical version of this treatment. It is a one-off experience that shakes up your brain until the synapses are screwed and shorted - yet somehow leave you with a much clearer idea of how it might be to experience schizophrenia and how we might go about treating it.

The audience is split into two (in a series of never ending splits) and effectively sat in front of two different plays, which are split down the middle, with a curtain separating the two different audiences and stage spaces. On one side, a mother (Patrizia Paolini) and her one or possibly two sons. On the other side, a son and his doctor, who sometimes seems to double up as his dad. The son almost definitely has schizophrenia and the others – well, that’s anyone’s bet.

The first half is a bit like sitting in a bath with your head submerged, and your whole life – past, present and future – screaming at you from somewhere beyond the water. It doesn’t make a lot of sense and it feels a little bit like drowning. Occasionally, a few words – which might possibly make sense – drift over from the other side of the stage but it’s very hard to latch on to anything. It is impossible to tell if the mother has some serious issues or if she just isn’t being listened to properly. It is hard to tell if things would make more, or less sense, if you could just block out those voices that keep crowding in from beyond the stage.

The interval is a swirl of confusion, irritation and anxious anticipation. In the second half, we are seated on the other side of the stage and all that was nonsense or irrelevant first time round suddenly takes centre stage. It is such a clever device, which poses important questions about the nature of psychosis. Is madness just a question of perspective? And what happens when we begin to take the visions and voices seriously? Do they become less strange and actually start to make sense?

A distinctly odd sense of déjà vu settles over one is this second half, as strange phrases or bleated out words repeat themselves, but this time with meaning. The script is really very clever and ingeniously subversive. The son, receiving treatment, frequently mentions the play that we are writing, teasing us with the frailty of this own ‘reality’ we are supposedly experiencing. At one point, the idea is introduced that it is the doctor who is mad and this whole plays is actually a vision of his own making. Threads of sense are teased and pulled in endless directions, always on the point of unravelling but somehow holding together.

‘Eradication’ is a mind-boggling and frustrating experience but hugely useful and provocative too. There are so many twists, turns and inversions in here that it could have been a total mess – but there is a cool and steely sense of calm to this production that holds all the chaos within a soft shell of sense. This is a brave and thoughtful show that isn’t afraid to confuse the hell out of its audience, in its quest to make sense of mental illness.