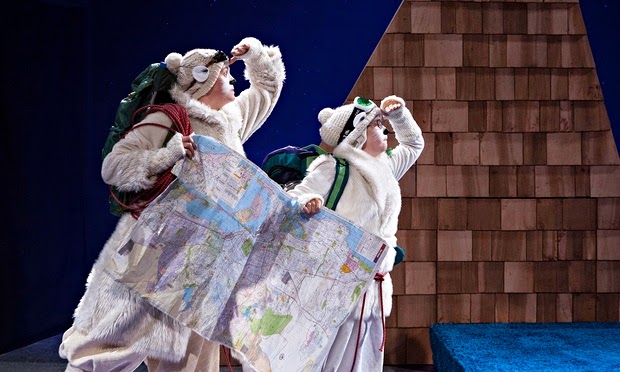 The last time I took four-and-a-half-year-old Barney to the theatre, it was panto season: sweets rained from the sky, loud pop music was blasted throughout the venue and Barney got so excited, he could barely breathe. This time, I’m taking him to a gentle show about polar bears. It takes a little while to adjust.
The Polar Bears Go Wild starts very quietly and very slowly. In fact, actors Eilidh MacAskill and Fiona Manson – who also wrote the show – do not utter a single word throughout their Arctic adventure. At first, this silence seems to bother the kids (particularly panto-obsessed Barney), but it’s actually a very clever device. The quiet nudges the children into concentrating a little harder and allows the younger audience members (the show is two-years plus) to gawp happily, without being left behind. Soon the theatre is humming with questions, the silence filled by the children’s instinctive curiosity.
MacAskill and Manson keep the story very simple, but accent the show with generous emotion and plenty of cheekiness. The two polar bears travel across a mountainous terrain, in search of a snowy mountain top. They clamber up hills, ski down slopes and curl up to sleep. They play around with pots and pans and whistles, and they tease and comfort each other. They spend quite a lot of time munching on sandwiches, always with their smiling faces turned out towards the audience.
It’s an almost meditative experience, watching these two beaming polar bears on their sedate but playful adventure. A contented calm spreads throughout the audience. Barney’s expectations now adjusted, he settles into this quiet but absorbing journey. The relative lack of action means the tiniest of twists have a great impact. At one point, a little flap is opened out in the set to reveal a set of shelves, packed with kitchen goods. Barney lets out a startled cry: “Whaaaaaaat?!”
MacAskill and Manson carefully reel in their audience. Eventually it feels as if the whole audience is reacting spontaneously and in sync. The two polar bears find a boat and begin to row. With just a few pieces of coloured felt and some twinkling sound effects, the sky behind them is filled with sunlight. The sunshine spills out into the audience and, while the rain pours down outside, we happily bask in the warm glow of the theatre.