'Islands' review or 'Shall we all just jump in the sea?' 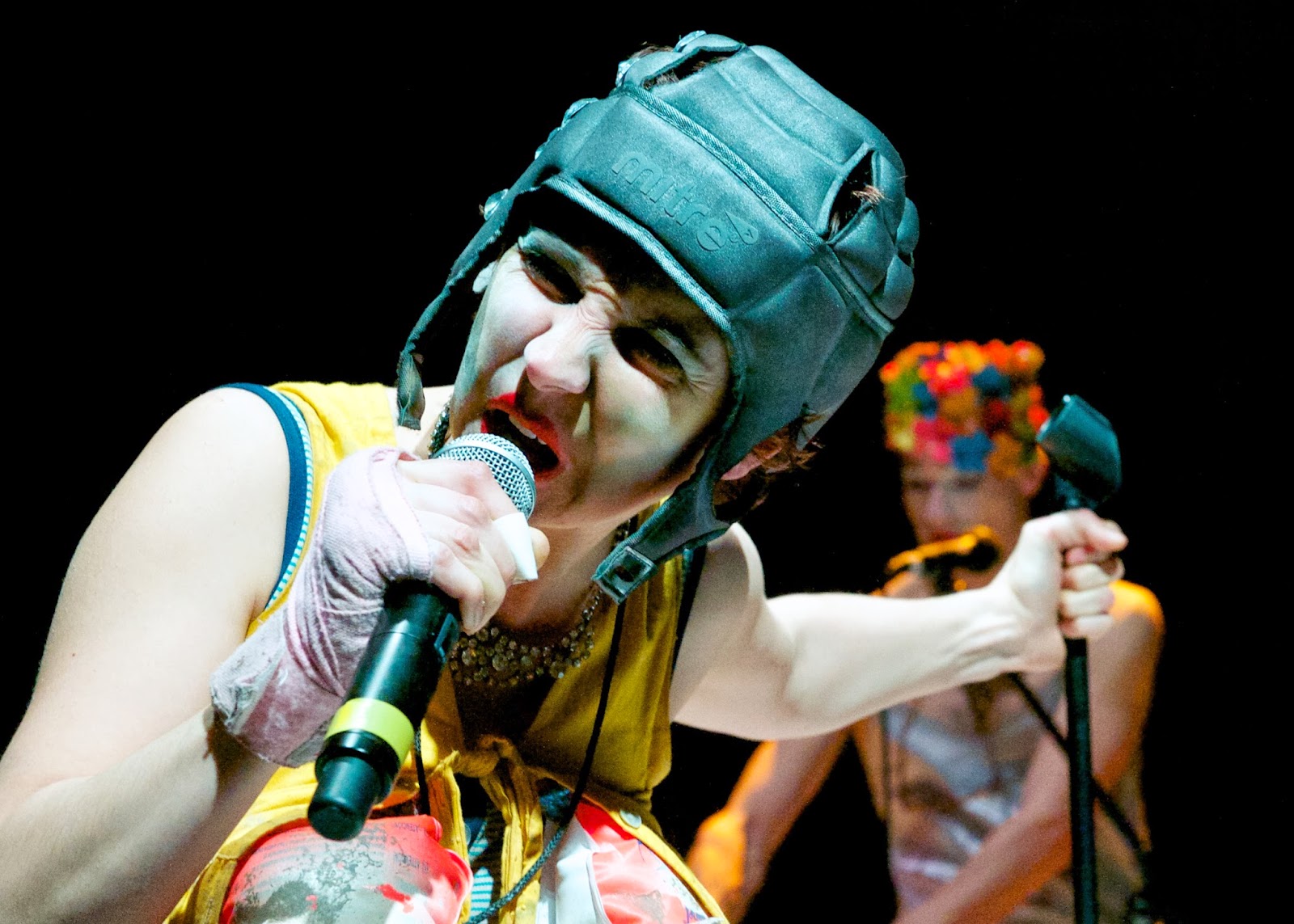 ‘Islands’ has been slaughtered by most of the critics and, let’s face it, the show is a monumental mess. Set in a mysterious land, floating somewhere above the ‘little people’ in ‘shit world’, ‘Islands’ is supposedly a surreal and grotesque examination of tax havens and the people who enjoy them. Mostly, though, this show fees like a lot of very smart and talented performers have gotten mightily carried away and forgotten both their subject matter and their audience. But there is one thing that rescues this kaleidoscopic fury of a production: Caroline Horton. Put Horton on a stage and the whole space seems to fill with an eerie power, sadness and hope.

Horton’s entrance is thrilling. She staggers into the stage space – an empty pool (designed with grotty relish by Oliver Townsend) full of random detritus, dying plants and a toilet – and pumps the theatre full of a clingy and unsettling atmosphere. Horton wears a crash helmet, chalky make-up and a mass of scraggly skirts and petticoats. Something sinister and sparkly dangles between her legs and huge inflatable boobs droop from her chest. She looks like a tramp crossed with a rotting Playboy magazine, Puck from Midsummer Night’s Dream and some weird nightmare you never quite woke up from.

Horton shuffles around the space, grinning manically and guzzling down cherries. You can feel the audience’s confusion. They want to pull away but there is something so compelling about Horton that pulls you in, almost in spite of yourself. She makes you want to love her even though your very skin recoils from her presence.

So, yes, Horton’s character is fucked up and kind of fucking amazing. But then the play happens and the power of Horton’s Mary – a strange demi-god who hovers above the real world and rules over her screwed up subjects – is lost in the confusion. The key problem here is that the subject matter is quite dull. ‘Islands’ was written in conjunction with ‘experts in offshore finance’. Yawn. Perhaps this research turned out to be packed with jargon and dry as hell. It feels like the company grew frightened of their material and decided to chuck every prop, madcap character, weird fantasy, Biblical reference and odd digression at their show, in a manic attempt to sex things up. The show smells of fear (which director Omar Elerian has done little to dispel): the fear of being boring.

It is very hard to spot the research among the chaos. Instead of learning something – or at least feeling something - about tax havens, we merely get mightily confused. Little glimmers of sense emerge from the madness, as Mary and her followers rattle around the space, sing songs, drag about bloodied packages, share weird allegories and laugh at the little people of ‘shit world’.

So – glimmers of sense. At one point, a glowing mannequin warns Mary and her followers that the people of shit-world are going to start clamping down on off-shore havens. That is one of the few clues (other than some endless banging on about a bowl of cherries) that these crackers characters are somehow tied up with tax. Red lights flash and everyone runs about for a bit. During a spoof game-show, we are drip fed some information about how the privileged few avoid their taxes. Nuggets of sense are occasionally chucked at us, but they make little impact amid the chaos.

Some moments do stick and suggest what this show might have been, if only the ensemble had pulled their heads out of their ass and pulled things together. There’s an amazing cabaret scene from Simon Startin who, half naked and dressed in a pink feather bower, sings the song of the little man and meakly bleats about the importance of austerity measures. And then there is Caroline Horton. In one startling scene, Horton’s Mary sits on a creaky platform and describes the horrific details behind a bull fight. She describes the way in which the bull is actually ‘killed’ twice and how the matador hacks away at the spinal cord, paralysing the bull in order to imitate death. It is such a strange and gripping moment and, for a second, we wonder how much everyday ‘spectacles’ might distract us from grim reality. And then someone starts stripping, puking or singing a weird little ditty and we stop thinking altogether.