'The Caucasian Chalk Circle' review or 'Who is drawing these lines?' 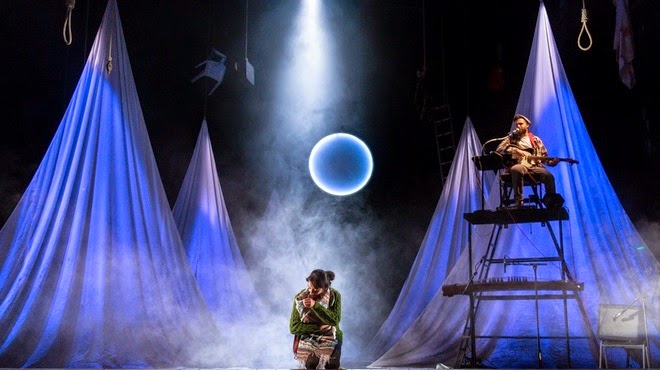 The bods at the Unicorn Theatre don’t scare easily. They recently staged a riproaring adaptation of Shakespeare’s ‘Henry V’ for children and now they’re tackling Brecht’s 1944 play ‘The Caucasian Chalk Circle’. It is a demanding work, which asks complex questions about capitalism and social justice, but Amy Leach’s vivid production keeps both children and adults enthralled.

The play is set in Georgia in the throes of civil war. In a vicious opening, Georgia’s governor is killed by rebels and his wife forced to flee. In the confusion, the governor’s baby is left behind. Servant Grusha (Kiran Sonia Sawar – all heart and guts) is left to pick up the baby and the play tracks Grusha’s struggle for survival, with plenty of Brechtian detours and music along the way.

Director Leach and designer Hayley Grindle invoke the horror of war, but also cleverly suggest the absence it brings about. Legions of dead soldiers are represented by clothes falling from above and bloody executions are depicted using beautiful gowns swinging from the rafters. Everything is tinged in red and Dom Coyote (composer and singer) underscores the action with a heavy pulse on his electric guitar.

Frank McGuinness’s stark and stirring translation brings to life a whirlwind of vivid characters. Mia Soteriou is equally convincing as a tough servant and cowardly farmer, Emily Wachter is frankly terrifying as the governor’s wife and Nabil Shaban is all seedy charisma as judge Azdak.

Perhaps the biggest surprise is how moving this production proves to be. Son Michael is represented by a puppet, yet a profound relationship develops between Grusha and her adopted son. It is the strength of their love that sticks the political knife in and begs the question: do we live in a society that rewards the right people?