'The Changeling' review or 'Who's afraid of the dark?' 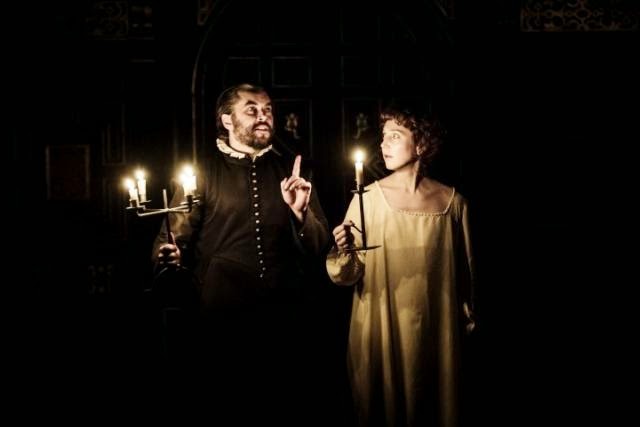 Sawn off fingers, rampant sex, scorched lovers, dancing mad men and a villain who looks like the Phantom of the Opera with his mask torn off; you’ve got to love a good ol Jacobean tragedy. Thomas Middleton’s and William Rowley’s ‘The Changeling’ (written around 1622) is a deliciously warped play, only a whisker away from all out melodrama. This candle-lit, chamber version by Dominic Dromgoole is horrifically good fun: twisted, cruel, surprisingly funny and with just enough flickers of human insight and emotion to keep us hooked.

Hattie Morahan stars as the conniving Beatrice-Joanna, who is betrothed to Alonzo (Tom Stuart, with a watery Cheshire cat grin), besotted with Alsemero (Simon Harrison, all swagger and smarm) and adored by her ‘sinfully’ ugly servant Deflores (Tystan Gravelle, the Phantom exposed). This is a woman trapped between three men and determined to control them all – and for much of the play, she has a damn impressive stab at it.

Morahan turns in a tantalizingly enigmatic performance. When we first see her Beatrice-Joanna, she is cloaked in darkness with only her face captured by the candlelight. She remains in the shadows throughout, in a play which is – in this clear-headed production – shown to be fairly obsessed with the connection between sight and truth or virtue. Beatrice-Joanna steers clear from the light and is silenced by just one question: ‘Are you honest?’

At first Morahan’s Beatrice-Joanna seems like a typically breathless heroine; Juliet with as a heap load more experience and cynicism. She speaks in a deep but wispy voice and sounds a little vulnerable, even if we suspect that vulnerability is purely an act. But as Beatrice-Joanna begins to scheme and plot with Deflores in her pursuit of Alsemoro, Morahan’s voice deepens and those early flighty passions turn sinister. We watch all the light that might have been generated from Beatrice-Joanna’s love for Alsemero transform into something dark and deeply twisted.

There is some serious heat between Morahan’s Beatrice-Joanna and Trystan Gravelle’s Deflores and their relationship feels much more mutual than previous interpretations. I have seen some actors play Deflores as an all-out monster but Gravelle’s performance is so light (a lightness augmented by his tripping Welsh accent) that we, nor Beatrice, never turn completely against him. For much of the time, we are on Deflores’ side, chuckling with him or, with breath held, staring at his actions with excited horror.

Dromgoole does not hold back on the blood and gore, which only makes Deflores even more appealing. Alonzo puts up quite the fight when Deflores goes in for the kill and the brutality of that scene – all that crawling across the stage, dripping blood and endless hacking - is exhilarating. The sheer drama of it all means that, despite the monstrosity of the scene, we can’t help but enjoy it. This is a play of such weird thrills and guilty pleasures.

There is an intimacy and gentleness (perhaps because of the soft lighting) about the Sam Wanamaker space that helps the audience connect and sympathize with the central characters, no matter how grotesque. It also helps that, even in the bloodiest of moments, little glimmers of cruel humour emerge. The moment when Deflores hacks off Alonzo’s ring-finger, after murdering him, is pure genius and very funny. That humour is no accident; in adding this odd appendage (or removing it - ho, ho), Rowley and Middleton cleverly distract us from the far more brutal crime that has been carried out just moments before.

The production gradually builds in intensity until we are all-but immune to the blood and utterly involved. The sub-plot involving the mad-house works brilliantly in tandem with the show proper. The actors double up and so too does Jonathan Fensom's set, until it gets hard to tell where one world begins and the other ends. We are jolted about, our expectations confounded, until it becomes very tricky to decide to trust, condemn or laugh at.

Our moral-compasses are set spectacularly adrift and our judgement led wildly astray. Slowly but surely, we are pulled deep into this world of cruel doctors, clever mad-men, cold-hearted heroines and blotchy-faced heroes. Just when you think things can’t get any stranger, the whole company - burned ghosts and all – gets back on its feet and dances a very strange jig in front of a gob-smacked audience. Crackers, chilling and bloody (bloody) good fun.