'The Picture of John Gray' or 'Pictures, prawns, poetry and priests.' 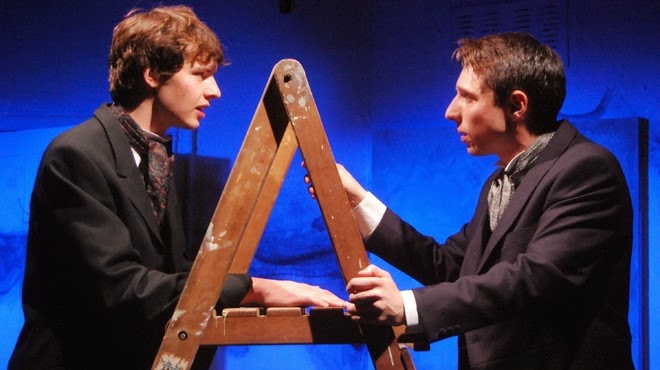 Oscar Wilde does not appear in this bright new play from CJ Wilmann, but his presence is felt keenly. He is like a dashing ghost, haunting his friends and enemies with great aplomb.

‘The Picture of John Gray’ takes place in London in 1889, around the time Wilde was imprisoned for acts of ‘gross indecency’. With Wildean wit and wisdom, Wilmann explores the profound impact of this trial – and the way that it pushed faith and friendships to the limit.

The title refers to the poet John Gray, who was Wilde’s lover and arguably the inspiration behind his novel ‘The Picture of Dorian Gray’. Patrick Walshe McBride plays Gray as a delicate and excitable soul, as delighted with prawns as he is with poetry. Against Rosanna Vize’s set of wistful paintings and half-finished canvases, the play tracks Gray’s transition from impressionable young poet to passionate lover to, finally, pious priest.

It’s a lot to squeeze into two hours and there are a few iffy moments in Gus Miller’s otherwise sharp production, particularly regarding Gray’s speedy religious conversion. But these are compensated for by the rich dialogue and feisty characters that keep us amused en route. Christopher Tester is seriously good as John Gray’s lover, the French critic Marc-André Raffalovich. He might sound a bit like Poirot but there is warmth and intelligence in everything he says.

Tom Cox is great fun as Wilde’s ex-lover, the boisterous Lord Alfred Douglas, or ‘Bosie’ to his friends. He thunders about the stage, proclaiming himself ‘defender of all things beautiful!’ But Wilmann also shows us the fragility behind the flamboyance. When Bosie reads his poem about ‘the love that dare not speak its name’, the show-acting drops and sorrow sets in.