'Aliens Love Underpants' review or 'I believe in aliens!' 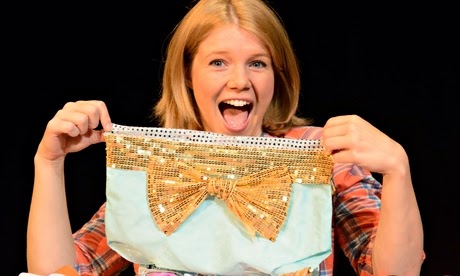 Leicester Square theatre is a grown-up theatre. It hosts comedy shows and cabaret acts and sells alcohol at the bar. The seats inside are designed for adults. When Rosa, the almost-four-year-old daughter of a friend, clambers into her seat, she can see diddly squat. We get her a booster seat. Still nada. Two booster seats secured and Rosa is now sitting atop her own little theatrical throne. She looks very grand indeed – if not a tad precarious.
We're here to see Aliens Love Underpants and the booster-seating arrangement turns out to be a handy success barometer. When the show is working, Rosa leans so far forward that I'm convinced she's going to tumble right off. When Rosa is bored, she leans so far back that I fear for the kid behind. It makes for a fairly stressful hour, but Rosa spends most of the time perched happily on the edge of her mighty seat, enjoying a cracking morning's entertainment.
Let's not beat around the bush. Aliens Love Underpants is not a grand or sophisticated piece of art. But Adam Bampton-Smith's show, which has been adapted from Claire Freedman and Ben Cort's hugely popular picture book, is one hour of pure, unadulterated silliness. It is children's TV in theatre form; loud, energetic and absurdly upbeat. There are fluffy puppets, charming performances and plenty of singing and dancing. And pants – lots and lots of pants.
Isla Shaw's set is slick, brightly coloured and mischievous. The performers are dressed in comic-book colours and backed up by some nifty projections. The actors also control the alien puppets, which are as eclectic and cheerful as Cort's original illustrations. The actors (particularly understudy Michael Jean-Marain) embody their puppets with great gusto, bounding about the stage and happily babbling away in alien speak. It's not long before the aliens feel like living and breathing creatures, walking and talking all by themselves.
One of the best aspects of the show is the easy and spontaneous interaction between the actors and the children in the audience. As the aliens sweep in and steal young Timmy's pants in front of poor old mum's eyes, the children squeal out their warnings. And when Timmy wonders out loud "Why does no one believe me about the aliens?", a little girl behind me screams out: "I do, I do!"
At times, Aliens feels more like a panto than a play, but there's no harm in that. Rosa can be quite shy sometimes but she happily joins in with the games, screaming out the colours and patterns of pants along with the rest of the packed auditorium. All the performers have a great mixture of charm and authority, encouraging the crowd but somehow keeping this frothing mass of kids in check. Charlotte Cooper is particularly endearing and is willing to do anything – dancing and prancing about with endless pants on her head – to keep the audience happy.
A few moments do drag. Some of the songs go on a bit and one hour feels a tad long for what is essentially a glorified pants parade. There's only so much silliness even the silliest child can take. But there is much magic and mischief here – and that, really, is the essence of all great family theatre.
• Until 31 Aug.