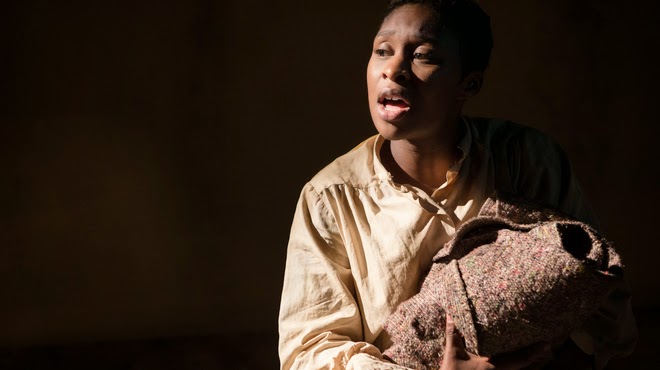 ‘Dessa Rose’ is a brutal musical with some red-raw scenes that will rip right through you. It is about slavery and friendship, set amid the American plantations and penned by the ‘Ragtime’ dream team of Lynn Ahrens and Stephen Flaherty. This is its European premiere and it’s a tight production, lit up by some brilliant singing. It’s just a shame about the shaky second half. Director Andrew Keates is a pro at pulling off big musicals in small spaces. Garance Marneur keeps his set minimal, with little more than a dirt-stained wall and some evocative lighting. Twelve singers, plus the band, squeeze on to the tiny stage and belt out Flaherty’s rich soul music with precision and passion. The harmonies pile on top of each other and, particularly in the blazing song ‘We Are Descended’, it sounds like the whole world is singing for us. Cynthia Erivo is phenomenal as the titular Dessa Rose, who is born into slavery and thrown into jail but never stops fighting for freedom. Erivo recently starred in ‘I Can’t Sing!’ and is so talented that she could make a phone book sound good. She is backed up brilliantly by Cassidy Janson who plays the conflicted white girl Ruth and invests her role with both haughtiness and compassion. The cast can’t be faulted but the musical overall is dodgy. The second half is one big tangent, packed with random ghosts and forgotten plot threads. But it’s still worth experiencing for the singing. I will never forget Erivo’s performance of ‘Twelve Children’, blasting out their real names – dropped by their ‘masters’ but restored in song.