'A Streetcar Named Desire' or - 'How do I get off this ride?' 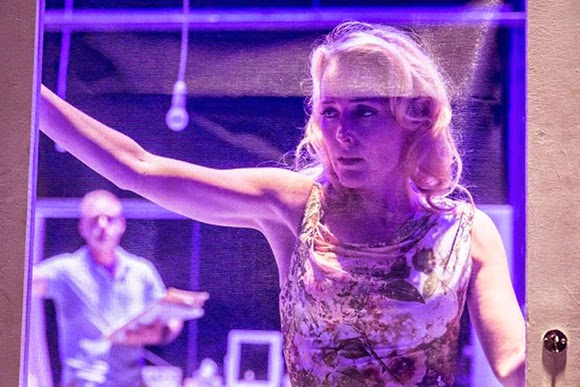 No one desired this Streetcar more than I did. I adored the X-Files and Gillian Anderson so much when I was a teenager, I had hand drawn pictures of Mulder and Scully papered across my bedroom. In 2012, Benedict Andrews’ electric version of ‘Three Sisters’ made me thirst for Chekhov in a way I never thought possible. And Streetcar – well, when it’s done well, it’s like injecting your veins with the most awesome drug imaginable. But this Streetcar – this Streetcar has stalled!

First up, Anderson. No matter how much I want to rave about Anderson – and I think she is a fabulous actor with icy power pumping right through her – I don’t think she’s the right actress to play Blanche DuBois. Whatever Blanche is – and you can play her broken, bonkers or as a scheming ho – she is big and she is impressive. She expresses! She is the type of lady whose skin is so thin and whose language is so big, it must feel like living with an over-developed child actress.

But Anderson – Anderson is an exceptionally compact actress, in both the physical and emotional sense. All her best performances – as Scully, the detective in The Fall or her ghostly Miss Haversham – are strong but restrained. Anderson generates power from what is left unsaid and from the passion we can sense but is buried very, very deep. But Blanche DuBois’s skin is wafer thin and her grand performances and speeches, just a whisper away from total meltdown. Her broken heart is on her sleeve. She as an exposed soul, which doesn’t suit Anderson’s strengths. It doesn't feel heated up or big enough for me. It is only in the few scenes when the mask is dropped, such as during Blanche’s heart-ache of a confession to Mitch, that Anderson’s DuBois really grabs me.

Ben Foster, as Stanley, is good at smashing things and working himself into a spitting rage but when he leaves the stage, his presence leaves with him. The best Stanley’s lurk over the space like an ugly boxer that refuses to leave the ring – but this Stanley slipped way. I didn’t find myself thinking about him for much of the time.

Vanessa Kirby is a passionate actress who can generate such heat and anguish. I certainly felt her strongly but perhaps she was a little too heartfelt. Her wails, when a glazed Stella was led away in the final scene, frustrated me. They gave me permission to feel sad when what I what I wanted to feel was confused and shattered. The diction also wasn't brilliant from all three principal actors and the Southern drawl, such a precariously loose accent, gobbled up some of Williams’ best lines.

Benedict Andrews’ direction, which can be so forthright and smart, feels a little lacklustre. Many of the scene changes are accompanied by blaring music and bold lighting states from Jon Clark, which left me baffled. All the heat and fury of these scene changes only highlighted the stillness and vagueness of the scenes in between.

Finally, there is Magda Willi’s fire exit of a set, which is composed of a steel and open plan framework. Apart from a couple of blessed moments, this is a set that is constantly rotating, slowly swinging around and around. This strikes me as a monumentally lazy device. Why work on sight lines when the set will do it for you? Why carve out vignettes or build up momentum, when the set will do it for you? A few useful images emerge – particularly in the layering effect this rotating see-through set allows. At one point I noticed - all in one line of vision - a sprawled drunk, a half-cut Blanche and a sober Stella carefully brushing her teeth in the bathroom. But most of the time this constant rotation feels indulgent and pointless; like being on the dullest merry go round of your life, with no chance of escape.