'The Apple Tree' or 'I like my apples fluffy.' 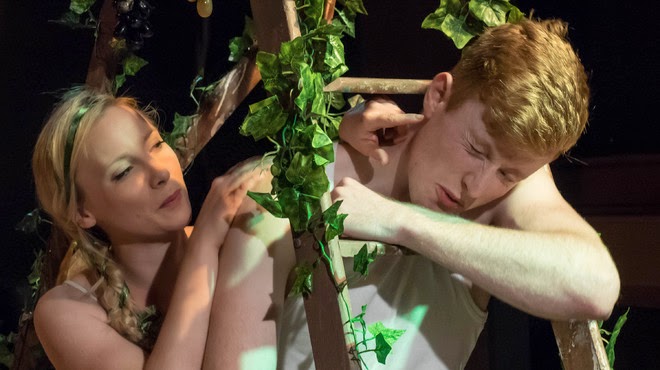 Women, be careful what you wish for! ‘The Apple Tree’ is a curious three-act musical, based on a trio of short stories about ambitious women, eager for knowledge. Penned by Sheldon Harnick and Jerry Bock, who wrote ‘Fiddler on the Roof’, the 1966 work has been produced in this country only once. That’s not a surprise: despite its social concerns, it’s a very frivolous piece, however much Brendan Matthew, director of this revival, longs for it to be more.

The opening act is set in the Garden of Eden and sees a grumpy Adam (Rafe Watts) and upbeat Eve (Catriona Mackenzie) name the plants and animals and fall in love. Mackenzie has a nicely honed voice but director Matthew tries too hard to make this skit mean something profound. There’s a lot of wailing and crying and not even the pretty animal puppets (designed by Kat Gagan) can cheer things up.

Things get a lot rowdier with ‘The Lady or the Tiger’, which showcases Rosie Glossop and Daniel Donskoy’s considerable talents. Glossop plays Princess Barbara, a bolshy royal who must decide between saving her lover or releasing him to love again. Donskoy narrates and his sardonic singing and Glossop’s abandoned performance make for a spicy combination.

Finally, ‘Passionella’ tells the story of young Ella (Michaela Cartmell), a poor chimney sweep who dreams of fame. Cartmell is a natural comedian and she charms the hell out of the audience, winking and shimmying as if her life depended on it. Light, fluffy and jolly good fun, this production is best when it sticks to what’s in the writing.