'Muswell Hill' review or 'You say this is a desirable location?' 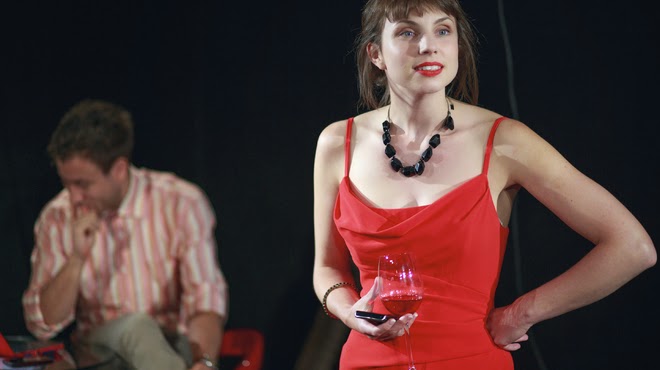 Don’t be fooled by the title. ‘Muswell Hill’ might sound cosy but Torben Betts’s play, which premiered  to critical acclaim in 2012, is a painful affair. It depicts a disastrous dinner party in north London, during which everyone talks incessantly but barely interacts. It’s a sharp and angry play; a painful portrait of a middle-class milieu, more connected than ever but barren with loneliness.

Every form of dialogue imaginable is crammed in here and each is as empty as the next. There’s criss-crossing chat, double entendre, angry tirades and jargon-filled blather. Accountant Jess (Annabel Bates) and her ‘writer’ husband Mat (Jack Johns) chat as they prepare supper, their sterile conversation tingling with secrets.

As the guests arrive, the feeling of isolation amplifies. Karen (Fiona Rodrigo) is more interested in her dead husband than the living and Simon (Alastair Natkiel) is obsessed with the ‘emptiness’ of his soul. Jess’ sister, Annie (Nicole Abraham), is fired up on coke and her fiancé, Tony (Gregory Cox), is a washed out thesp, unable to stop performing.

Technology pushes the characters even further apart. Mat is hooked to his laptop and Jess welded to her phone. These devices bring news of a devastating earthquake that has ripped through Haiti – but the details (nearly two million homeless!) are impossible to process and fall on deaf ears.

Directing this speedy revival, Roger Mortimer-Smith keeps the tension on a knife edge and the show feels cool and dangerous. Nancy Surman’s set is perhaps a little clunky: piles of rubble surround a shiny kitchen, reminding us of a wider world that is more visible than ever but all too easily ignored.

But the writing is fierce and the acting bang on. Annabel Bates is particularly brilliant as the adulterous Jess. She looks so stiff and sounds so cold that one half expects an alien to burst through her chest. At least it might provide her with some company.