'I Believe in Unicorns' review or 'Shared imaginations'

'I Believe in Unicorns', Michael Morpurgo
Vaudeville Theatre, 16 August 2014
Written for The Guardian 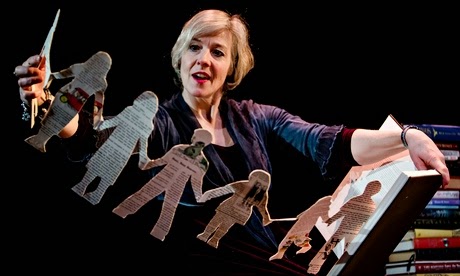 My mission to turn my god-daughter Blue into a theatre buff is coming along nicely. In fact, when Blue found out we were going to the theatre again, she put on her very best dress and was miffed to discover the show wasn't for another two weeks. By the time our theatre date arrives – a trip to see the stage show of Michael Morpurgo's children's novel I Believe in Unicorns – she is bursting with excitement.
Things start a little shakily, particularly when I tell her the show is set in a library. In Blue's world, this sounds boring. Thankfully, designer Kate Bunce's set looks more like a circus than a library. Huge piles of books and rickety ladders fill the stage and ropes and ribbons dangle from the rafters. Blue excitedly whispers to me, "When will they start climbing things?" I don't have the heart to say there will be no acrobatics in this rather talky one-woman show.
With such a lively set glimmering in the background, the opening scenes feel a bit dull. Danyah Miller is a patient performer with a honey-sweet voice – but she's a bit too normal for Blue, who likes her theatre as weird and wonderful as possible. There is an awful lot of chatter about a mayor and the re-opening of a library, which flies right over Blue's head.
The age suggestion for this show is 5-years-old but it could be a bit higher. There are so many stories squeezed into director Dani Parr's production that even I get a little lost. The main plot follows young Tomas – a lad who has no time for books, until he meets the magical Unicorn Lady at his local library. Miller plays all the roles and it's hard to keep up. The script also alludes to the second world war, which rumbles angrily in the distance. It's a lot to take in on a quiet Saturday morning.
There's lots of grumbling in the stalls until the show focuses on the stories contained within the library books. Gradually the set comes to life, as the books release the magic captured within their covers. Miller opens up one book to reveal a delicate model of a house, with lights glistening in the windows. She opens another and pours real milk from the pages. A ladder is pulled from one book jacket and a rope from another. In Blue's favourite sequence, Miller darts about the stage with a kite, pulling it from one book and then another until, finally, a huge kite swings from the rafters.
There are some beautiful projections to fire up the imagination. In one scene, Miller pulls open a huge book and an image of young Tomas, running and laughing, is projected across its pages. Later, a parasol is opened out and a songbird is projected onto its spinning and floating surface.
At its best, I Believe in Unicorns taps into the inspiration and solace that books can provide. Its beauty is that it allows us to share those imagined new worlds together. Near the end of the show, Blue leans over and whispers: "You're my best friend!" Mission accomplished.