'The Roof' review or 'Does this thing take batteries?' 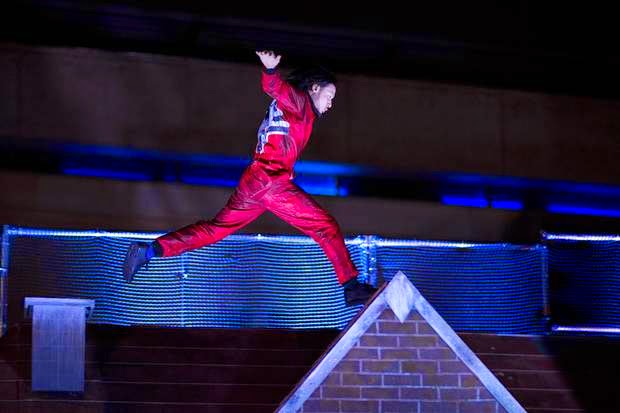 This was meant to be the big blockbuster draw of the LIFT Festival. The makers of ‘Electric Hotel’ – Frauke Requardt and David (Shunt) Rosenberg - bring you ‘The Roof’! This is theatre as sexy, ambitious and exposed as you could hope for; a computer game writ large on the London night sky! Damn, this should have been fun. But it’s game over pretty much from Level 2 in.

Jon Bausor’s set is enticing enough. The show takes place in a car park by the National Theatre and is pleasingly shut off; it feels like we’re being let in on a secret. The audience is handed headphones. We cluster together in the middle of the car park and, above our heads, a ring of rooftops and coloured bumps and obstacles snake around the space. A huge scoreboard is suspended against the sky, highlighting the number of points, levels and lives our plucky hero has amassed or lost.

There’s a lot of novelty to use up with this promising concept and the show initially feels cheeky and surprising. A red clad hero rises up in a whirl of smoke, as a breathy voice in our heads tells us this is us, up there, leaping across roofs and fighting for our lives! The first baddy, who seems to have an egg yolk for a head, is a shock. The first time a chicken plops out of a sewer and makes a silly squeak, we all chuckle. The first time the hero avoids the baddy and makes a few impressive leaps forward, we cheer him on – our thoughts echoed by the cheering pumped through the headphones.

But the ideas and clarity quickly dry up. There’s a lovely and quirky sound track from Dave Price which, for some reason, is controlled by a lonesome girl in a room. This girl is pretty much pointless. She spends a lot of time bopping about to the music – and she might possibly be the real-life or computer-life object of lust for our avatar – but none of this is properly integrated into the show and, frankly, she just gets in the way.

In fact, an awful lot of the ideas and figures in this show, which should have added something, just pull the concept apart and leave it broken and exposed. There’s a second shadow hero who occasionally appears and runs about the set. He moves in a less robotic manner than our main man and his face is beaten up. His movement is beautiful and fluid but, every time he appears, the computer game concept crashes. Perhaps hero number two is meant to be the real-life alter ego of the original player or perhaps he’s meant to represent doubts -  who the hell knows but he doesn’t fit in the game and it’s like watching a bug run around and mess up the system.

There’s no coherent system here which, for a show based on a computer game, is a major blunder. What are the rules of this game? Are the baddies meant to be frightening? How many levels are there? Does our hero have an ultimate aim? Where is the motor and motive moving things forward? Computer games are logical and addictive but both these qualities are seriously lacking here.

Requardt’s choreography is expressive and quirky but, much of the time, the dancing slows things down. Is this an abstract muse on the vagaries of life or is this an awesome, all singing, beeping and flashing computer game? Every time a level is completed, a sheet drops down and some dancers writhe around a little. It’s laboured and abstract and completely removed from that feeling of sweet release one gets after completing a computer game level.

There are a few moments when the game takes off and the show becomes energised and giddy.  Every time our hero takes on the course at full pelt, shooting the baddies and leaping across the terrain, exhilaration whips right through the crowd. But there’s far too much wallowing and the show is stuck a piece of high-concept art and a silly homage. Gradually, ‘The Roof’ runs out of batteries and the show shuts down.