'Hobson's Choice' or 'The shoe is on the other foot.' 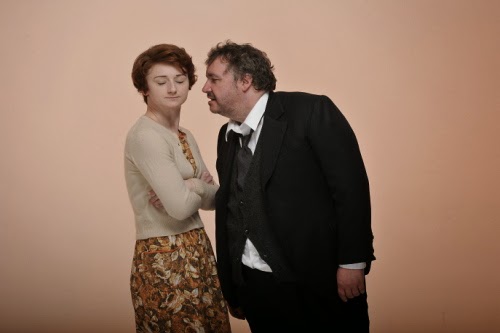 I’m never sure about comedy performed outdoors. Go too big – in an attempt to reach your audience – and you’ll find yourself in pantomime territory. Go too small and your performance will fizzle and die. That’s why comedies often feel so big (and boring) at The Globe. Director Nadia Fall has just about cracked it, though. This outdoor production of Harold Brighouse’s fairy tale comedy, ‘Hobson’s Choice’, feels funny and real – with just a flutter of fantasy around the edges.

Ben Stones’ set looks like an unfinished sketch. A two storey house stands centre stage, walls cut off at the top and bricks piled around the edges. It looks like the end of an era, which is a pretty useful prompt for a play – initially set in 1880s Saflord but here relocated to the 1960s – that addresses the shifting role of woman in society. The stage is on a revolve, which lends a magical sweep to proceedings and infuses the show with a snappy and playful feel.

As with many of Fall’s productions, a number of songs have been worked into the play. These songs work pretty well; they take the edge of the crueller characters and give the audience permission to laugh. The first scene sees Henry Hobson (Mark Benton) – the loveable (ish) villain of this tale – swagger on stage, blind drunk, singing along to ‘This Life’. At first, Benton sounds pitch perfect but, as soon as he enters his home, he sounds appalling and pissed. The difference between Benton’s imagined and real self is suitably startling.

Despite this savvy opening, the play takes a little while to settle. Mark Benton could have been a touch more vicious in these early scenes. After all, his character – Henry Hobson – has forced his three daughters to work for free in his shoe shop for their entire lives. He is a snob, a slave driver and an alcoholic – but Benton is just a touch too twinkly. Whilst it’s good we don’t lose Benton’s Henry to role of panto villain, there could’ve been more edge to these opening scenes, which set the stage for daughter Maggie’s phenomenal rebellion.

The production takes off when Maggie – Henry’s oldest and smartest daughter – kicks into action and engineers her new life at break neck speed. Jodie McNee, as the thirty year old and ‘shelved’ Maggie, is a veritable force of nature. She practically barks out her love to the startled object of her affection, the meek and unassuming shoe-maker Willie Mossop (Karl Davies). He is her ticket out of this life of servitude – ‘a business idea in the shape of a man’ - who could mean a new start and standing in society for Maggie and Willie.

It could all feel a bit hard hearted but McNee shows us just enough chinks in Maggie’s armour to allow us to see the woman beneath the warrior. Before Maggie proposes to Willie (‘I think you’ll do for me!’), she takes a few deep breaths and checks her hair in the mirror. On her wedding night, there is such vulnerability about Maggie when – dressed in a flimsy night – she coaxes her frightened husband into a kiss. And there’s a memorable moment late on when Maggie says goodbye to her sisters and is palpably affected by their gratitude and rare admission of love.

McNee is the whirring motor to this show but also the emotional centre, which stops the play feeling too formulaic or statement-driven. When Maggie fights, it feels like she is fighting for all of us. And when she succeeds, it feels significant – a win not just for Maggie but for all the Maggie’s that might come after.