'Mr Burns' review or 'When are we going to wake up?' 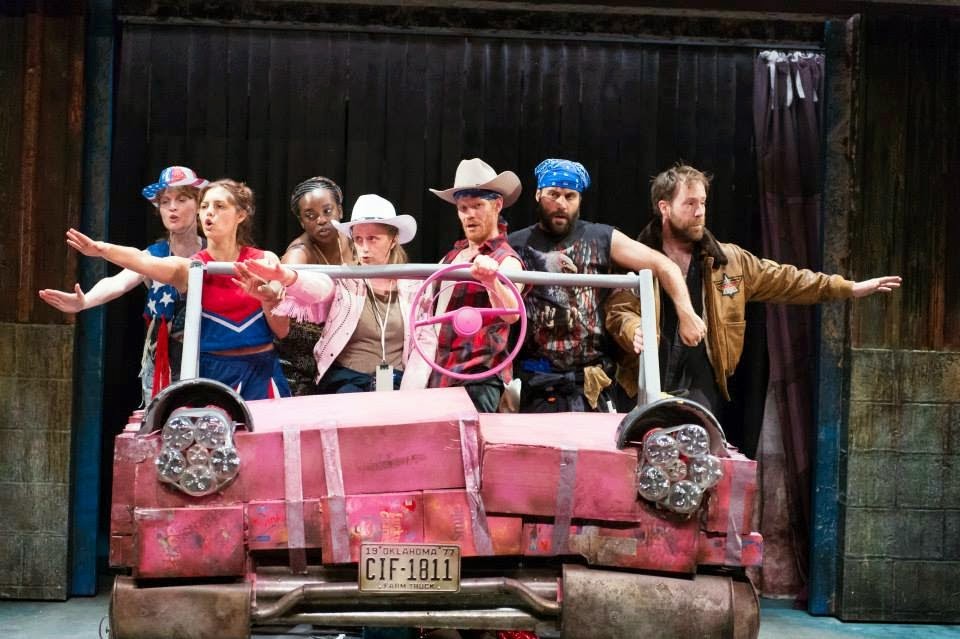 Phew! Watching Mr Burns feels like waking up from a wild nightmare, panting and exhilarated. You know Anne Washburn’s ‘post-electric play’ must mean something – it feels too vivid and vital to let go – but exactly what it means, is anyone’s guess. Try explaining the show to a friend and you’ll sound a little nuts – but experience it for yourself and you’ll be convinced this nightmare of a show is real.

The world is in radioactive meltdown and a few survivors gather around a campfire and try to stay alive. They don’t know each other but they do know the Simpsons and, with fevered intensity, the gang tries to recall a particular episode, Cape Feare. I don’t know the episode well but it involves Bart, a lot of death threats from Side Show Bob and a number of movie references. The nature of this episode – or even the fact that it is Simpsons at all – doesn’t really matter. All that matters here is the conviction with which this group act and the collective certainty they all hold that clinging onto this cartoon – this memory they all share – is the only thing that will keep them sane and alive.

Robert Icke – he of 1984 fame – directs ‘Mr Burns’ with wilful, brave and baffling obscurity. He refuses to impose meaning or emotion on any single scene, character or moment. It is a bold approach and creates the impression that there is something more solid – more understandable and meaningful – lurking in the wings, if only we could bloody reach it.

The first act, with the frightened gang clustered around the fire, could have felt familiar and frightening. But Icke refuses to over-emphasize that fear and give us something useful to hang on to. Other than a few hulking shadows, generated by Tom Scutt’s blacked out garden set, this is a fairly stress free first act. There are little flashes of fear but the main focus of the energy is on remembering that Simpson’s episode. This is the sole focus of the group and their primary concern.  It might be merely a distraction from the scary stuff unfurling in the world beyond them but it is a big distraction and it is working.

The first act ends with a jolt – but even that isn’t quite as frightening as you’d hope or expect. It is more like a low thud that hurts but doesn’t really satisfy. When the curtains come up again, seven years have passed and we’re in a clapped out warehouse or garage. It looks like real (ish) life for a second, until we realise this gang is actually acting. Their camp-fire recollections have moved on and now they’re preserving this Simpson’s episode for the big screen, although it is very possibly the filming element is fantasy and they are creating this show merely for their own amusement.

This second act also sees the group create a strange commercial, in which a character dreams of baths and Pret and diet coke and fanta. Again, Anne Washburn’s ‘message’ is far from  straightforward here. This isn’t a play that says: look at the lows to which society has sunk! Look at how we still cling to commercialism and materialism in times of great despair! Look at how we hold onto the very things that will destroy us! It doesn’t feel as simple as all of that. There is something bigger at work here, as this gang work frenetically and obsessively on their weird ass TV episode – and it isn’t all bad.

There is a final music montage in this middle act, during which the gang clamber on a massive pink car – ingeniously constructed out of bits of junk and diet coke bottles, with just a whisper of the Grease movies about it – and sing clutches of pop songs, rap and gawd knows what else. All the bits of music are melded together in a jaunty and frantic fashion. Every time the audience recognises a snatch of a line – ‘Living la vida loca!’ – giggles bubble up from the crowd. We are sharing this performance together, we are recognising and we are happy.

The gang don’t really smile as they perform but they don’t look terrified either, only determined. They look a bit like a bunch of school kids in their bedrooms, carefully working out a routine. There is an air of steely purpose about them, as if they are creating something very important. At the end of the act, it becomes obvious that something or someone pretty dark is controlling this show – something that we, in the audience, are potentially part of.

The final act is the one that will stay swooshing around in your head for months to come. Time has jumped forward 75 years and those stories around the campfire have transformed into something awesome and gruesome, fantastic and moving. With original music from Orlando Gough and Michael Henry, this final act is part opera, part talent show, part Egyptian dance, part vaudeville and part pantomime. Tom Scutt’s design is a celebration of the imagination. The stage is encircled with sparkly sheets and the costumes are a cracking mixture of formal opera costume, snatches of bobbly cartoon shapes, gothic masks and an awesome Halloween party.

Spearheaded by Jenna Russell’s piercing singing and a brilliant performance from Demetri Goritsas as Mr Burns (part Scream mask, part drawling Texas baddy, part skeleton and part pirate), this final act tingles with humour, danger, despair and hope. Everything we have already witnessed is nestling somewhere in this final performance, only it has been morphed and twisted and remoulded completely. Flashes of memories spark up in strange places. There is something quite spectacular about the resolute adaptability of this once inconsequential Simpson’s episode and everything contained within it. It’s look watching a game of cultural Chinese whispers on an epic scale.

What’s important about this final act is that it so much stronger and more textured, packed with all types of artistic references and heritage, than that first extract we watched all those years ago. There are some very silly moments and it feels chaotic but one can’t shake off the feeling that this is performance is worth something. Threat and sorrow lurk somewhere off stage but this performance, for a few random seconds, has real emotion and heart locked in it. Somehow, through swirling turmoil and darkness, these people are beginning to make something of this world, something that could – against all the odds – endure.