'The Notebook' review or 'Can we pick a different story?' 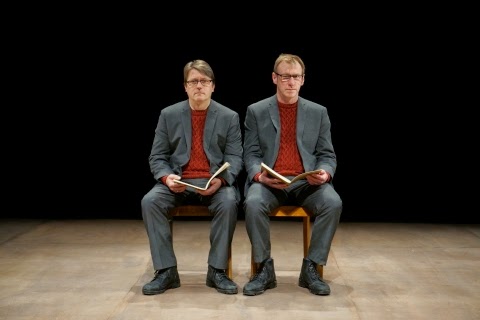 I’m not sure I want to delve back into this one. Forced Entertainment’s new piece, The Notebook, is harrowing stuff. Based on Hungarian writer Ágota Kristóf’s novel, this two-man show tells the story of two young boys – twins – sent to live with their grandma in the Hungarian countryside during WWII. All the horror, hardship and twisted emotions of wartime Europe are coolly witnessed through the boys’ unflinching eyes, which refuse look away, shed a tear or even blink. Frankly, by the end – and damn this is a gruelling 2 hour long show – I was ready to curl up and cry.

There’s nowhere to hide with this production, which is as bare as anything I’ve seen on stage. Robin Arthur and Richard Lowdon stand in a low spot-light and hold their scripts. There are two chairs on the empty stage, placed in various configurations, which the actors occasionally sit on. The lighting state changes but otherwise ‘Notebook’ is just two men, sometimes speaking separately and other times in perfect unison, telling their – or the boys’ story – of life in wartime Hungary, which was eventually occupied by the Germans and ultimately taken over by Soviet forces.

Tim Etchells and his actors tread a fine and fascinating line between acting like children and behaving as ‘normal’ adults. There is a hint of childishness to Arthur and Lowdon’s performances but certainly no hair twirling or squeaking voices. Lowdon’s is the less affected of the two performances and I prefer it. The only childish thing about his delivery is the economy of the words spoken, mimicking that precision with words that comes so instinctively to kids. Arthur performs with his eyes wide open and there’s something a little mannered about his delivery that occasionally grates. This is such a cool and unembellished script that it demands a completely neutral performance. Anything else feels dishonest.

Other than those over-extended eyes, there’s not a vowel, word or shift in pace that is out of place. The boys’ story unfolds amid an eerie air of calm. Voices are never raised and fear and horror, never released. Their story is horrific – funny in places but mostly just very, very sad. Their grandma hits them and burns their mother’s packages. Shop keepers scream and strange neighbours have sex with dogs. Kindly maids abuse them and officers wield whips. All of this happens without the slightest whimper or raise of an eyebrow. The tone never shifts although the tempo occasionally picks up, as if mimicking the quickening of a frightened heart.

Gradually, we begin to feel trapped in this world which we cannot predict and cannot escape. There’s a feeling a blocked horizons that begins to mimic a life lived in an occupied town during WWII. There is nothing for us to do but endure the atrocities that unfold in front of us. The fact that there are no visuals – only words - amps up the feeling of claustrophobia. We imagine this world as the boys narrate it. Their words are embellished by images we conjure up. Their world is a world we have helped to create, filled in with our imagination, our memories and our emotions.

There is an awful complicity to ‘Notebook’, engineered with canny precision by Tim Etchells and his company. We are lulled into a false sense of security – happily complying with these sweet (and wildly precocious) little boys and their adventure story until it is too late. Originally, the images we help create are relatively harmless. We see their grandmother stooped over a wheelbarrow, taking her fruit and veg to market. We see the boys hidden in the attic, peering down at the secret world below. We see them in the woods and playing schools at home. We willingly enter into this world and, by the time we realise the implications of this agreement, it’s too late. We allow them to ‘occupy’ our minds – our bodies, our ‘towns’ - before we know the full story.

The lack of judgement from the boys is hard to bear. Their refusal to react or run away only makes the experience that much more painful and shocking for the audience. The boys’ stubborn naiveté – their willingness to see the good in those around them – renders us powerless. We hear about a kindly maid who has finally agreed to wash these little boys. The ‘boys’ narrate the episode and, without a flinch or flicker of doubt, the girl moves from happily washing these little boys to sucking their cocks. There is no warning. The boys watch a girl play around with a dog and, again, the scenario becomes deeply twisted in the blink of the eye. The speed of these shifts – the total lack of warning – reminds us just how quickly evil can encroach on a seemingly innocent situation.

Perhaps the most difficult aspect of this show is how just warped the idea of love becomes. Any form of tenderness is accompanied with the most brutal sting. An officer shows the lads some kindness – but he also asks them to beat him to a bloody pulp. An old cobbler shows the boys great compassion – but the reason for his generosity is overshadowed by the threat of death. And even their grandma – who we think is an easily identifiable ‘bad person’ - is beaten up after she reaches out to a line of miserable souls, undoubtedly being led to their death. This is a hideous world, where compassion is laced with malice, love intermingled with pain and loss and the line between good and evil blurred beyond all recognition.

On top of all of this, the form of the shows – these two ‘boys’ reading us a story – has the air of the bed-time story about it. We are cast as the children, listening to these two boys tell us their bedtime story. The very people we long to reach out and comfort have been cast as our protectors. It is the ultimate cruel twist in a show that flips the natural order of things on its head and plunges us into the anti-reality – the negation of all that made sense or felt human - that was WWII.