'The Night Alive' review or 'A hammer to the heart.' 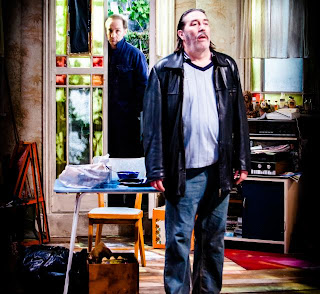 You know the story about the butterfly wings and the earthquake? That’s a Conor McPherson play. His characters are not extraordinary people. In fact, they’ve often led apologetic lives in half-lit rooms. His dialogue is not declamatory. Instead, it’s deceptively off hand, with McPherson rarely letting his extraordinary lyricism roam free. His plots are relatively self-contained. But there is always this delicate fluttering at the heart of his plays which eventually sets off an almighty bang.

‘The Night Alive’ begins on a typically low-key note. There is just a whiff of danger to the opening scene; a slash of red against a grey horizon. Slick haired and sloppy bellied Tommy (Ciarán Hinds) arrives home with whisp of a girl, Aimee (Caoilfhionn Dunne). Aimee has blood on her face and a hunted look in her eyes.  Whenever Tommy is kind to her – as he encourages her to seek solace from her attacker in his grimy Dublin flat – Aimee winces. A gentle manner is as foreign to Aimee as a punch in the face is to more fortunate souls.

Tommy turns on the light and we wish he hadn’t. This is the type of room – designed with typical expansive precision by Soutra Gilmour – that looks much better with the lights off. It is the type of room where the toilet might well double up as the kitchen sink. The next day, when Aimee returns from a shower wrapped up in a towel, she looks like a white vision hovering atop a rubbish tip.

No one could have directed this piece better than Conor McPherson. He holds back way more than anyone else would dare. This is acting that doesn’t feel like acting, a play that doesn’t feel put on. Michael McElhatton turns in one of the most muted yet moving performances I’ve ever seen, as Tommy’s slow but devoted friend Doc. His heart is so exposed you can practically see it beating.  As Aimee moves in on his territory, Doc all but pisses around his bed in fear and frustration.

McPherson expresses Doc’s worries with scenes so slight they could be considered throw away, were they not so brilliant. Shortly after Aimee’s arrival, Doc scrambles through Tommy’s door in the middle of the night, brandishing chips. All three stay up and eat and listen to Marvin Gaye on the radio. And then they dance, big smiles on their faces and glowing with happiness. This is life worth living – if only for a moment.

And then the temperature shifts. Shifty Kenneth (Brian Gleeson) arrives on the scene, looking for Aimee and busting for a fight. Just as his characters and audience are most exposed, McPherson releases the danger and poetry in his play. Kenneth talks of the evil nestling inside his soul, the black oil that swarms in front of his eyes. All this while, Kenneth holds a hammer in his hand. Doc, alone in the room, backs away from him like a cornered animal. The fear is unbelievably tight and real. McPherson opens us up and then cuts right through us with the cleanest of blows.

The heart soars and drops, calms and roars. Life is not big speeches and epic moments. It is  tremors of joy, jolts of sorrow and flashes of fear - and it's all here, in this gem of a play.