'Chimerica' review or 'A rubik cube close to completion' 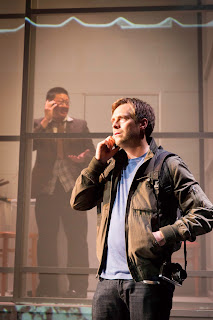 It is so hard to get young writers to think outside the (black) box these days. Thankfully, Lucy Kirkwood isn't interested in thinking small. Her latest play, 'Chimerica', is a 3 hour epic that explores the complex relationship between America and China. Forget modest small-scale drama. 'Chimerica' is about the future of our planet.

Lyndsey Turner's production – in association with Headlong - is a study in controlled chaos with its swirling scene changes, scrawled projections and pounding energy. Es Devlin's cuboid set is in perpetual motion; a giant rubik cube tantalisingly close to completion.

At the centre of this theatrical brain-tease is one unforgettable photo; the Tank Man image from Tienanmen Square, 1989, in which a lone protester stands firm as an army tank roles forward. Kirkwood imagines the journalist who took this photo and plots his quest, years on, to track down the Tank Man. It is a frenetic adventure which sees fictional journalist, Joe Schofield, join the high mile club and stoop to new lows as he races tirelessly between New York and Beijing.

Stephen Campbell Moore intrigues as the work-obsessed Joe Schofield. His character acquires new shades with every swivel of the stage; charming but selfish, noble yet cowardly. His propensity to chuck money at everything – especially the Chinese characters who will not provide the answers he requires - casts an interesting light on international relations.

Kirkwood's quips fizz but they are also revealing. Reporter Schofield's savvy girlfriend, Tessa (Claudie Blakley) offers this zinger early on: 'No one likes to know they're unremarkable.' And Schofield's acerbic boss, played with relish by Trevor Cooper, is a cantankerous delight: 'And I used to have a prostrate. Big deal.'

The best lines are awarded to Schofield's contact in Beijing, the disillusioned English teacher Zhang Lin. Benedict Wong is initially inoffensive, even bland. But as Zhang's memories of Tienanmen Square take hold, his shame and rage boil over. Wong's performance creeps up on us and slaps us bang in the face. 'I will not sleep!', he cries. After watching this bold and brilliant new play, neither will I.