'Sweet Bird of Youth' review or 'This bird needs stuffing.' 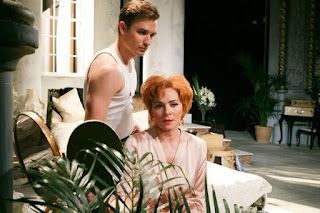 Kim Cattrall plays a burnt out and boozed up actress, Princess Kosmonopolis, in Tennessee Williams 1959 play 'Sweet Bird of Youth'. This is a woman so run down by chasing success, she needs an oxygen cannister to breathe. She has hit rock bottom and her rock of hashish is the only thing keeping her alive.

Following a horrific comeback attempt, Princess Kosmonopolis flees to the Gulf coast  along with gigolo and struggling actor Chance Wayne (Seth Numrich). Chance is here to win back his girl, Heavenly Finley (Louise Dylan) and his reputation. But the world has hardened in Chance's absence. Heavenly - daughter to brutal businessman Boss Finley - is no longer Chance's girl and their future together, no longer a possible salvation.

All the Tennessee staples are here but they don't quite click in Marianne Elliott's stylish production.  The languid delivery and drawn-out plot (dramaturg James Graham could've made this piece sharper) drag down the production. There's not nearly enough drama or sexual chemistry to kick-start a number of flat-lining encounters.

The scenes between Princess Kosmonopolis and Chance Wayne never get going. When the two flirt, the only thing that passes between them is words. The Princess is constantly labelled a 'monster' but Cattrall is hard to dislike. She convinces most when she is vulnerable, weary and wise.

After a slow start, Seth Numrich turns in a performance of real depth. The more Chance pretends, the closer we get to him. As Chance jokes around with old friends he never really had, the fear drips right off him.

The production gets better as it grows more surreal. Rae Smith's looming set reduces the characters to mere playthings. Huge pillars rise up in the foreground and the characters dance about like ghosts in a half-lit patio. Chance is almost always obscured in these closing scenes – a bit part actor in the story of his life. 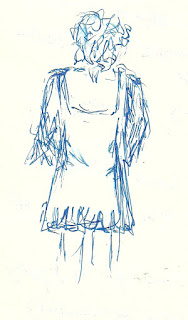