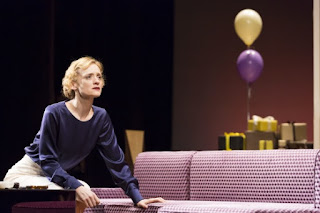 O'Neill's 'Strange Interlude' (1928) is a beast of a play. In fact, it's so long (the original running time is nearly five hours), it's rarely staged. It is packed with archaic asides, in which the characters endlessly voice their inner thoughts. Oh - and there's a hellishly awkward plot twist.

Simon Godwin's brilliant National Theatre productions blows these concerns out the water. He has cut to play down to a taut 3 (ish) hours and embraced the asides, both comic and tragic. He has also lent his production a cool contemporary sweep.

Despite the awed title of 'epic', 'Strange Interlude' is actually an intimate chamber piece. The focal point is Nina Leeds, played with beguiling ease by Ann-Marie Duff. The play opens just after World War One, with Nina crushed by the recent death of her fiancé. Three suitors hover in the wings: dashing Doctor Darrell (Darren Pettie), the hapless Sam Evans (Jason Watkins) and plum mummy's boy, Charles Marsden (Charles Edwards).

Nina eventually settles on silly Sam, who has the general demeanour of a lost clown. She resolves to have a quiet life filled with loving children. But Nina's plan is blown apart when she discovers Sam isn't so safe after all. In fact, all Sam's relations have gone insane and there's every likelihood his child might go bonkers too.

With any lesser actress, such a clunky plot device might hang around too long, doubts lingering. But Ann-Marie Duff's unaffected performance smooths over all the bumps. Duff also exudes a sexual energy that is so often missing in O'Neill's ghostly females. She sits on all of her suitors' laps, an act as childish as it is seductive.

Soutra Gilmour's set falls at odd angles, the perspective subtly skewed. The angles are gradually made starker and the clutter removed. Eventually we are left with scenes that feel stark and contemporary; a stripped down New York apartment or a huge boat against a blank horizon. The combined effect is extraordinary: O'Neill feels like a modern master.